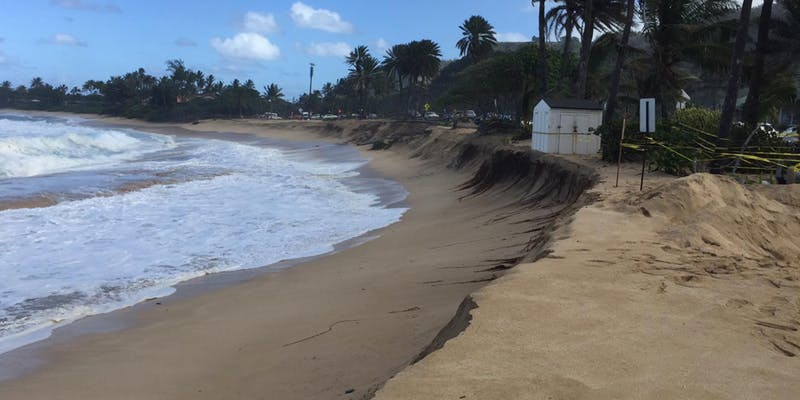 On June 6, 2017, Governor David Ige signed Act 32 Session Laws of Hawaii, 2017 making Hawai‘i the first state to enact legislation implementing parts of the Paris Agreement. The Paris Agreement was signed by 195 nations on November 4, 2016, and is the largest concerted global effort to combat climate change to date.

Unprecedented warming of the atmosphere due to greenhouse gas emissions poses a significant threat to the people of our State. That is why we are fully committed to confronting climate change by systematically reducing greenhouse gas emissions and improving our resiliency to its deleterious effects utilizing the principles and contributing to the goals set by the Paris Agreement.

To better understand the effects of climate change and seal level rise on island communities, a Hawaii Sea Level Rise Vulnerability and Adaptation Report (SLR Report) was completed in December 2017. The SLR Report was prepared to provide a statewide assessment of exposure to sea level rise and its potential social, economic, and environmental impacts ion our island state.

Modeling coastal hazards with sea level rise is based on the projections of the Intergovernmental Panel on Climate Change Assessment Report 5 (IPCC 2014) that predict over 3 feet of sea level rise by the end of the century in a “business as usual” greenhouse gas emissions scenario. However, because projections are continually being updated and often accelerated due to ice sheet instability, we suggest moving towards a process that incorporates 3.2 feet of sea level rise into present planning considerations.

A Hawaii based team has created a Sea Level Rise Exposure Area (SLR-XA) which depicts the area exposed to potential chronic flooding and land loss based on modeling passive flooding, annual high wave flooding, and coastal erosion with sea level rise. The report monetizes assets impacts within the SLR-XA and provides recommendations for adaptation.

It is anticipated that the report will have a major impact on the coastal planning industry and will serve as a model for island nations for assessing threats due to sea level rise.

Or register on Eventbrite