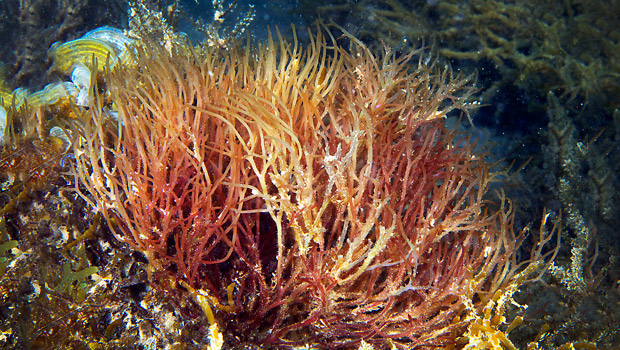 Seaweeds, called limu in Hawaiian, include a wide variety of marine algae. These marine plants are the basis of the food web on reefs and rocky shores. In Hawai’i, limu are found in many marine environments from tidepools to deep reef slopes. Most seaweeds also need a hard surface of rock or coral on which to grow, few are found in sandy environments. There are over 600 different species of seaweeds in Hawai’i.

Gracilaria coronopifolia, is an endemic red algae that that is found along Hawai’i’s shorelines to a depth of 12 feet. Traditionally this seaweed was called limu manauea. Today G. coronopifolia and other species of Gracilaria are more commonly called by the Japanese name ogo. Ogo’s popularity in many types of local foods and habitat degradation has led to the reduction of the natural population. Today, ogo being successfully raised in aquaculture facilities in throughout Hawai’i and the Pacific region.

Distribution:
Endemic to the Hawaiian Islands