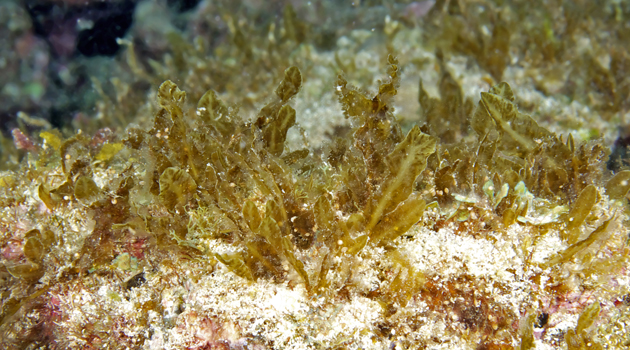 Seaweeds, called limu in Hawaiian, include a wide variety of marine algae. These marine plants are the basis of the food web on reefs and rocky shores. In Hawai’i, limu are found in many marine environments from tide pools to deep reef slopes. Most seaweeds also need a hard surface of rock or coral on which to grow, few are found in sandy environments. There are about 600 different species of seaweeds in Hawai’i.

Dictyopteris plagiogramma, and D. australis are two species of brown seaweed given the Hawaiian name limu līpoa, and both are found in shallow water reef flats and in deeper water. Limu līpoa was traditionally eaten heavily salted and preserved. The strong odor from the underwater seaweed beds is mentioned in Hawaiian songs and chants.

Distribution:
Widespread in tropical and temperate seas, including Hawai’i