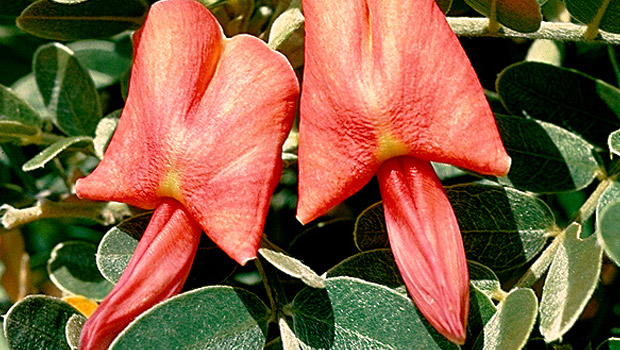 The littoral fringe ecosystem is as much a part of Hawai’i’s shorelines as our popular beaches and reefs. The Aquarium wants to emphasize the important link between land and sea by drawing attention to this often overlooked native environment. Healthy shores and healthy reefs are a part of Hawai’i’s heritage. Just as plants of the uplands protect the watershed with a cloak of vegetation, coastal plants secure the dunes and slow shoreline erosion. And, many coastal plants serve traditional uses and hold cultural significance in Hawai‘i and throughout the Pacific. Some plants, like the naupaka-kahakai (Scaevola sericea) are indigenous – found naturally in Hawai’i as well as elsewhere. Others, like the ‘ohai (Sesbania tomentosa) are endemic – unique species found only in Hawai‘i. While others, like the kukui (Aleurites moluccana), were brought on canoes by early Polynesian settlers. These plants aren’t considered native, they are very culturally important species, that allowed early settlers to survive on remote islands with unfamiliar vegetation.

Sadly, human activities have altered or destroyed the natural profile and vegetation along much of Hawai’i’s shores. Some shoreline developments and homes are built on the shore rather than behind it; landscaping often uses exotic ornamentals rather than adapted native plants. On less developed shorelines, recreational activities like, camping, and even hiking on the dunes, break the protective cover of vegetation, causing dunes to erode, and allowing aggressive weeds crowd out remaining native species.

‘Ohai, an endemic member of the pea family, was once reported from all main islands in the Hawaiian archipelago. Now, however, it is restricted to scattered and isolated populations on sandy beaches and sometimes inland sites. There is so much variation from location to location that some researchers consider each population, like the one at Ka‘ena Point, slightly unique. This rare shrub is distinctive – its low, canopied growth form and shimmering silver-green leaves create a striking profile. This profile is functional, among this native plant’s many adaptations for survival in a harsh shoreline environment characterized by salt spray and scant fresh water, sandy soil, strong winds and scorching sun. The ‘ohai bears salmon-colored pea flowers and long, slender pods from winter through early summer. But for flowers to bear fruit, a pollinator is required… and here the ‘ohai is again distinctive. The natural pollinators and ecological partners of ‘ohai are small native bees (Hylaeus spp.) no larger than 6 mm – most of us would mistake them for little flies. But, the vital “pollination service” the bees provide is now threatened by the spread of exotic insects like honey bees and ants. A University of Hawai‘i graduate student studying the ‘ohai population at Ka‘ena Point notes that the decline of these and other native pollinators represents a threat to the survival of Hawaiian plant populations.