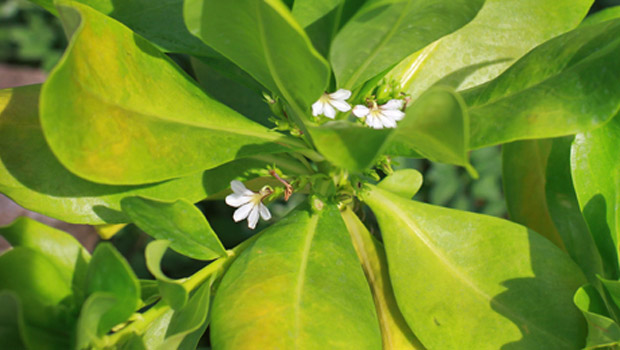 Beach naupaka is probably the most familiar of the coastal plants seen along Hawaiian coastlines. This hardy plant has tough, waxy leaves or, in some varieties, leaves that are fuzzy. The wax or fuzz on the leaves helps prevent water loss from the plant and the leaves are thick for storing extra water. Naupaka has seeds encased in a pulpy white coating that protects them from salt water and allows them to float to other parts of the shoreline. The roots are shallow and branched to hang on to the loose sandy soil and spread out to gather the little rain that falls. This indigenous plant is one of the hardiest and abundant native plant seen in Hawai‘i.