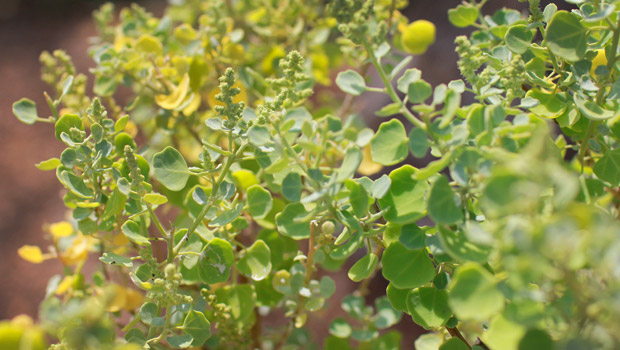 Sadly, human activities have altered or destroyed the natural profile and vegetation along much of Hawaii’s shores. Some shoreline developments and homes are built on the shore rather than behind it; landscaping often uses exotic ornamentals rather than adapted native plants. On less developed shorelines, recreational activities like, camping, and even hiking on the dunes, break the protective cover of vegetation â€“ causing dunes to erode, and allowing aggressive weeds crowd out remaining native species.

‘Aweoweo is an endemic shrub that can grow in sandy soils. The leaves, when crushed, can smell overwhelmingly like fish. In particular, they may small like the Hawaiian bigeye, also named ‘Aweoweo by early Hawaiians.