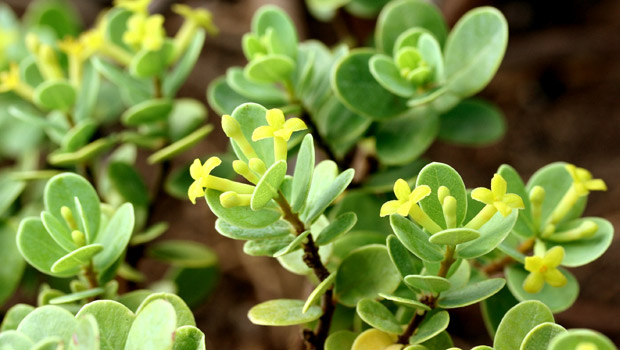 Sadly, human activities have altered or destroyed the natural profile and vegetation along much of Hawaii’s shores. Some shoreline developments and homes are built on the shore rather than behind it; landscaping often uses exotic ornamentals rather than adapted native plants. On less developed shorelines, recreational activities like, camping, and even hiking on the dunes, break the protective cover of vegetation causing dunes to erode, and allowing aggressive weeds crowd out remaining native species.

The endemic plant ‘ākia, is a sprawling shrub that is adapted to dry, windy, coastal cliffs and shorelines. ‘Ākia, though listed as a threatened species, has become a popular ornamental plant used in gardens around Hawai‘i, and at Waikīkī Aquarium. Traditionally, the bark from the roots and stems of ‘ākia were crushed and then thrown into small tide pools. Within a few minutes, stupefied fish floated to the surface and were harvested. The poison would dissipate, either through dilution or through time, and the remaining tidepool fish would recover from the temporary stunning.

Distribution
Endemic to the Hawaiian Islands, found from Kaua‘i to Maui