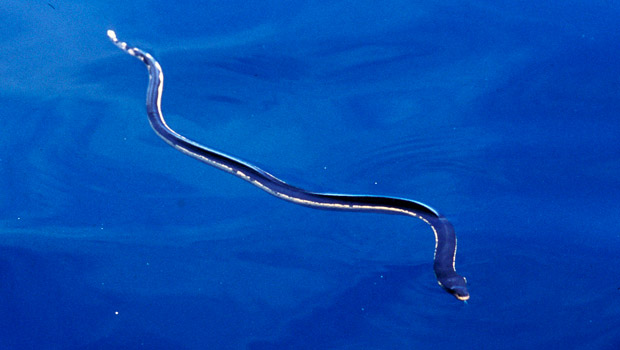 The yellow-bellied sea snake, Pelamis platurus, is the most widespread snake species on earth. It is found throughout the Indian and Pacific Oceans and from the eastern coast of Africa to the western coast of Central America. Unique among sea snakes, the yellow-bellied sea snake usually lives completely out at sea, criss-crossing the ocean by riding the ocean currents. While it is considered a pelagic (open ocean) species, it is occasionally carried into shallow water close to shore, or may even be beached during period of strong winds.

The sea snake’s body shows many adaptations for life in the ocean. Valved nostrils are located high on the snout for breathing while swimming or basking at the surface. The belly is tapered like the keel of a boat for stability in the water, and this snake lacks the flattened belly scales that give land snakes traction on the ground. The sea snake’s scales are knob-like and fit against one another like bricks, rather than overlapping as in land snakes. The tail is flattened and broadened to form an effective paddle for swimming. These snakes may spend up to 90% of their time underwater and can stay submerged for periods of 10 to 90 minutes, and possibly longer. The large amount of skin between the scales is richly supplied with blood vessels and acts like a gill, oxygen enters and waste carbon dioxide leaves across the skin surface. Nitrogen is also released across the skin, perhaps reducing the snake’s chances of getting the bends as it surfaces rapidly. Excess salt from the seawater and fish diet is excreted through special glands in the snake’s mouth.

Yellow-bellied sea snakes have been reported swimming slowly or floating motionless at the surface, but bursts of rapid swimming have been observed when the snakes are disturbed, during dives, and while feeding. These open water snakes are often reported drifting with currents at the surface and they accumulate in windblown drift lines. This may have an advantage for the snakes because there are often high concentrations of small fish associated with drift lines, and fish seem to aggregate beneath the snakes as if the snakes were floating logs.

Unlike other sea snakes that actively pursue their prey, the yellow-bellied sea snake relies on a slow, stealthy approach. The potent venom, injected by short, non-retractable fangs, is needed to paralyze prey quickly so that they do not escape. This snake increases its chances for capturing prey by feeding on schools of small fish rather than on isolated individuals, and feeding frenzies in which the snake bites any object in its path may result in more fish being captured. A wide variety of fish species are taken, with mullet, jacks, anchovies, damselfish, and juvenile mahimahi making up the bulk of the diet.

Yellow-bellied sea snakes mate and bear their young at sea. Another advantage of living in aggregations along drift lines is that finding mates is easier than by searching the open waters. Females retain the eggs within their twin oviducts and the young hatch as miniature adults. Two to six young are produced per brood, and the gestation period may be six months or more. The young are found throughout the year, suggesting that reproduction may be non-seasonal. Adults are usually two feet long (0.6 m), but may reach four feet (1.2 m) in length. The young are ten inches (25 cm) long when released from the female and are capable of feeding immediately.

This snake appears to have few predators. The striking yellow and black colors may be warning coloration, advertising the reptile’s venomous bite and perhaps unpalatable flesh (many fish offered sea snake meat reject it). The brightly spotted tail may be deceptive, attracting potential predators to the tail and enabling the snake to either turn and attack, or flee with only damage to the tail.

The yellow-bellied sea snake is reported to be among the more docile of sea snake species, but its venom is a potent nerve toxin that acts by blocking transmission of messages from nerves to muscles. Apparently, however, sea snakes do not usually inject their toxin when biting defensively and two of three defensive bites involve no toxin. The greatest number of sea snake bites to humans are reported from the Philippines and southeastern Asia where snakes are accidentally caught in fishing nets. Fatal bites result in death from respiratory, heart, or kidney failure. Less severe cases result in breakdown of muscle tissue and kidney damage, but victims recover without long-term effects if effective antivenom is received.