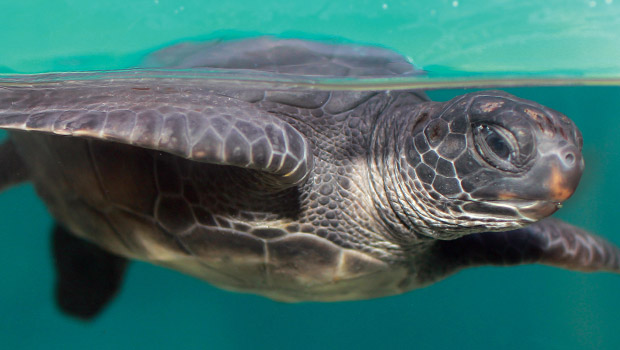 Sea turtles are air-breathing reptiles that are well adapted for their life in the sea. Their body is streamlined to move easily through the water with little resistance.  Their front flippers are used for swimming, pulling them through the water with powerful strokes, the back flippers act like rudders for steering.  Like other reptiles, the sea turtle’s skin is protected by tough scales, and like other turtles, fused bony plates form a protective shell (called the carapace on top, plastron on the bottom).  There are seven species of sea turtles found in the world’s warm oceans, and three of these have been reported from Hawaiian waters: the hawksbill, leatherback, and most common, the green sea turtle.

Green sea turtles, once widespread throughout the Hawaiian Islands, are now recognized as a threatened species. Habitat destruction, human disturbance, and overharvesting of these slow-moving animals have led to a dramatic decline in their numbers. There is no current estimate of the overall Hawai`i population, instead, the population is monitored by the number of nesting sea turtles at a particular site.  Since protection, the number of nesting females has increased at approximately 5.7% per year, at French Frigate Shoals where 90% of the nesting in Hawaiian Islands occurs. French Frigate Shoals is in the remote Northwestern Hawaiian Islands and part of Papahānaumokuākea Marine National Monument.  Many adult turtles live and feed around the main Hawaiian Islands, but make the migration of several hundred miles to the breeding grounds every two to four years.

After mating at sea, female green turtles crawl ashore at night, dig a hole in the sandy beach, and lay about 100 leathery eggs (each about 2 inches/5 cm across).  Each female may lay up to six clutches of eggs each breeding season.  The young turtles hatch as a group after about two months, climb from their nest and rush to the sea.  Young turtles are rarely seen during their first years of life, presumably, they drift with the currents out on the open ocean, feeding on small animals that live close to the surface.  When the turtles reach approximately 1½ to 2 feet (to 61 cm) in length (about 15 pounds/6.75 kg), their diet changes and they move into shallower water where they can graze on seaweeds.  The life span of the green sea turtle is still unknown, but it appears that Hawaiian turtles grow very slowly and may be 20 to 35 years of age before they are sexually mature.  Once mature, males can be distinguished by their longer, thicker tails and females by their higher, more domed shells.  Adult turtles can reach shell lengths of 4 feet (1.2 m) and weight up to 400 pounds (180 kg).

During the day, green turtles swim and feed on the reef, surfacing to breathe at roughly 15 minute intervals.  Green sea turtles in most parts of the world only leave the ocean to lay their eggs on sandy beaches.  In Hawaii, both females and males may crawl ashore to bask in the sun.  This behavior may help them warm up their bodies and may protect them from their main predator, the tiger shark.  At night, turtles are often found underwater, resting on the bottom or under ledges.  With slower night-time metabolism, they only have to surface once every few hours.

Hawaiian green sea turtles are unique in spending their entire lives within the Hawaiian Island chain.  All other populations of green turtles engage in international migrations that make it more difficult to protect them. The Hawaiian and other populations within U.S. waters are protected by the federal Endangered Species Act that forbids the harassing, harming, or killing turtles.

Our green sea turtles are currently on vacation from the Waikīkī Aquarium.