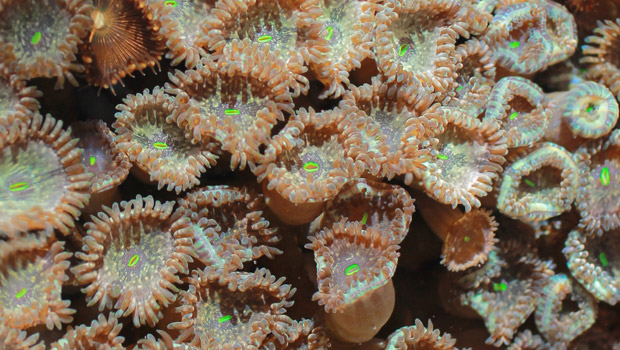 These anemone-like cnidarians encrust rocky surfaces, grow within cracks in wave-swept tidepools, or form mats in sandy back reef flats. Individual polyps may be less than 1.5 inches, but the colonies they form can cover much larger areas of the bottom, to several feet in diameter. The amount of tissue shared by colony members also varies: in some species the polyps share only a common basal stalk; in other species, the individuals are deeply embedded in a shared mat of tissue, as in the carpet zoanthid (Palythoa tuberculosa).

The zoanthid’s short tentacles do not appear to be effective for capturing large prey. Instead, the tentacles and disc-like area around the mouth collect particles of suspended organic matter (detritus) drifting in the water. Symbiotic algae living in the zoanthid’s tissues also contribute to their nutrition.

Some zoanthid species are toxic, the mucus of the gut cavity contains a potent nerve toxin. Early Hawaiians referred to this species as “limu-make-o-HÄna”, the deadly seaweed of HÄna, and reportedly used it to poison their spear tips. This toxic species (Palythoa toxica) is found in wave-swept rocky pools, but is not known to be common. However, caution is advised when exploring tidepools and sandy flats – if you cannot distinguish between toxic and non-toxic zoanthid species, it is best not to touch any of them!