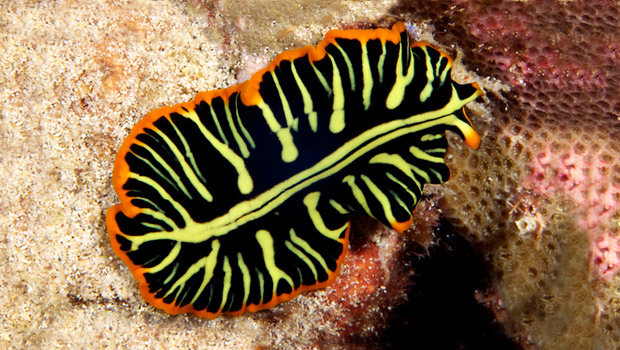 Flatworms belong to a distinctive phylum of their own. They are characterized by extremely flat, unsegmented bodies, with a simple head end. Their bodies are so flat that oxygen can penetrate the tissues without gills or other respiratory structures. They lack a circulatory system as well, but the gut is highly branched so that digested nutrients are circulated to all parts of the body. The gut only has one opening, so what cannot be digested has to be eliminated through the mouth opening.

Flatworms may only reach 1 to 2 inches in length, but are voracious hunters and scavengers on the reef. Most feed on smaller worms, snails or bivalves. They locate prey using chemical sensors at the head end of the body, either special sensory patches or folds along the front edge of the body and tiny antennae-like projections just behind the edge. They subdue prey by wrapping their flexible body around it, pumping digestive enzymes onto the prey (or into its shell if it is a snail or oyster) with a tube-like projection of the mouth (pharynx). Once the flesh is predigested and liquefied, it is pumped into the gut for further digestion and distribution.

Flatworms crawl or glide over the bottom by beating microscopic hair-like projections called cilia against a trail of mucus they lay down. Some worm’s bodies have muscular edges that they can ripple to travel more rapidly, and they can even swim short distances in a current by undulating their body edge.

While sometimes confused with sea slugs, flatworms are much simpler animals. They are very flat, lack the well-developed head with elaborate tentacles and sensory structures, and have no feathery gills on their upper surface. Flatworms are hermaphroditic, but cross fertilize. Both partners can lay flat spirals of tiny eggs on rock surfaces.

Rarely seen in the open, flatworms live on undersurfaces of rocks or in crevices of tidepools and the reef. They must be handled with extreme care, as their thin bodies easily tear. Some flatworms are brilliantly colored and the colors may warn of protective chemicals, and unpleasant tastes.