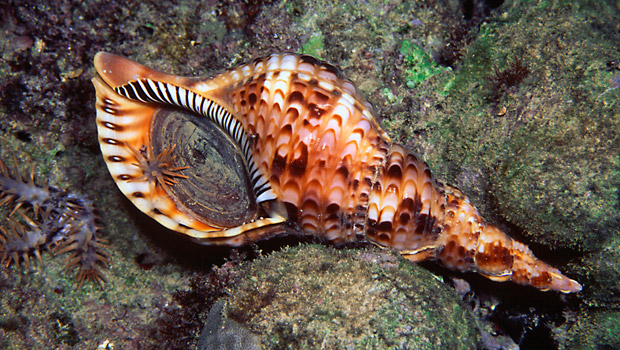 The Triton’s trumpet snail is the largest snail in Hawaiian waters — it’s steeply spiral shell may reach lengths of 20 inches (50 cm). This well-known species, Charonia tritonis, occurs throughout the Indo-Pacific, in the Red Sea, along the tropical coast of Africa, and in southern Japan. The English and scientific names refer to Triton, the ancient Mediterranean God of the Sea. A closely-related trumpet snail is found in the Atlantic.

In the Pacific, the Triton’s trumpet is found at moderate depths, from 15 to 75 feet (4.5 – 22.5 m) and deeper in coral rich habitats. This snail has an important role in the reef community. It is an active predator on coral-eating seastars like the crown-of-thorns and cushion stars. After locating its prey, the trumpet snail immobilizes the seastar with an injection of paralytic salivary juices, and then bores through the sea star’s mesh-like skeleton with sturdy radular teeth to reach the soft tissue inside.

Like other snails, the Triton’s trumpet has: (1) a well-developed head with eyes and tentacles, a mouth on a protractible proboscis (mouth tube); (2) a broad muscular foot for crawling; and (3) a soft body mass (containing the internal organs) which is protected by their shell.

Sexes are separate in the trumpet snails and fertilization is internal. The female lays a cluster of white, club-shaped capsules containing the developing snail embryos. The young hatch from the capsules as swimming veliger larvae and enter the plankton to drift in the open water.

Traditionally, Hawaiians used the shells as ceremonial trumpets by breaking or filing off the tip of the pointed spire or by making a hole in the side of the shell. Similar traditional uses of this snail shell are reported throughout the islands of the Pacific, Indonesia, and Indian Ocean. Because of the beauty and size of its shell, the Triton’s trumpet has been sought after by shell collectors and is now rare in Hawaiian waters as well as elsewhere in the Pacific. This species is protected by law in some countries, including Australia, Fiji, and the Seychelles.