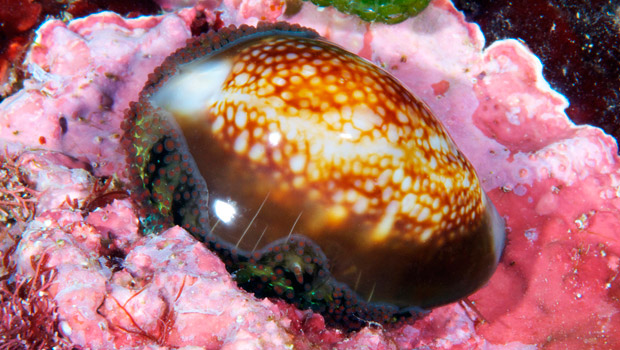 This species is the most common cowry snail in the Hawaiian Islands. It is found in shallow water under loose rocks or boulders along the shoreline, and in crevices on the seaward edge of fringing reef flats. It is rarely found deeper than 1 or 3 meters underwater where it grazes algae (seaweed) from rocks and reef using its file-like feeding structure called a radula.

The snakehead cowry shell is oval in shape, with a raised central area. The top surface is brown, speckled with white. A white line (mantle line) runs from front to back along the top of the shell, and the rounded base of the shell is dark brown. As in other cowries, the special mantle flaps extend up and over the shell, polishing and repairing the shell surface, and possibly camouflage as well. The mantle is olive brown with irregular spots or flecks of yellow, green, or white and is covered with frilly, branched extensions called papillae.

Cowries, like most other snails, have: (1) a well-developed head with eyes and tentacles, a mouth on a protrusible proboscis (mouth tube); (2) a broad muscular foot for crawling; and (3) a soft body mass (containing the internal organs) which is protected by their shell.

Sexes are separate in the cowries and fertilization is internal. The female lays a cluster of white, parchment-like capsules containing the developing snail embryos. The female broods these capsules, protecting them by covering them with her foot, until the swimming veliger larvae hatch and enter the plankton.