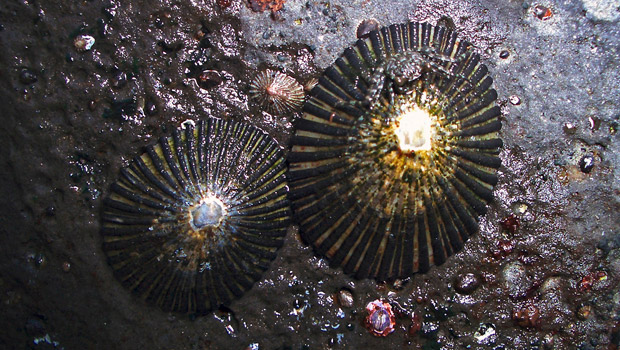 Limpets(called ‘opihi Hawai‘i) are common snails found on rocky shores throughout the world. But the four species that occur in Hawai‘i are endemic, found here and nowhere else! The most common species is the “blackfoot” ‘opihi (Cellana exarata) which occurs on basalt shorelines, from the splash zone high on the shore, seaward to the level of the mean low tide where crust-like pink calcareous algae forms a band on the rocks.

Like other snails, limpets have: (1) a head with eyes and tentacles, a mouth on a protractible proboscis (mouth tube); (2) a broad muscular foot for clinging and crawling; and (3) a soft body mass (containing the internal organs) which is protected by their shell.

Living on the rocky shore, the ‘opihi must withstand periods of drying exposure during low tides, as well as heavy surge and pounding waves at high tide. They cling firmly to the rock surface with the muscular foot that acts like a suction cup to keep them from being torn off the rocks. The cap-shaped shell has a low profile and low center of gravity so that the snail presents little resistance to the water as it pounds and pours over the shore. The ribs and grooves in the shell help spread the force of the crashing waves by channeling water down the sides of the shell. Each ‘opihi lives in a shallow depression on the rock that it makes itself, possibly by rasping at the rock with its radula. The edge of its shell fits snugly into this “home scar” so that little water is lost from the snail’s body during exposure to the air at low tide. The ‘opihi leaves its home scar to feed, grazing the algae from the rocks with a file-like feeding structure called a radula. After feeding, the ‘opihi returns to its home scar.

Sexes are separate in the ‘opihi and fertilization is external. In response to environmental cues, male and female ‘opihi release their sperm and eggs into the water, a process called broadcast spawning. Fertilization takes place in the water and there is no parental care of the embryos or young. Developing larvae called veligers drift in ocean currents with the plankton for a few days. Then, they settle onto shoreline rocks and metamorphose into the bottom-dwelling limpet form.

‘Opihi were eaten by early Hawaiians and are still a popular food item. Because they inhabit some of the roughest parts of the coastline, they can be very dangerous to collect. Legislation passed in 2006 makes it illegal to sell collected ‘opihi, it can only be picked for personal consumption. Researchers are looking into ways to raise these increasingly rare animals using aquaculture techniques.

Scientific name
Cellana exarata and others