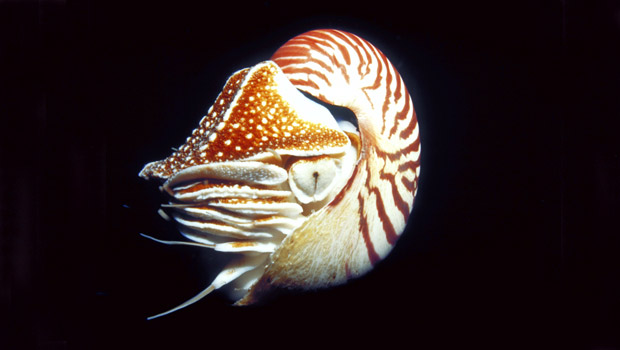 A “Living Fossil” With an Unusual Lifestyle

The nautilus, whose beautiful shell has inspired poets and puzzled scientists for centuries, is also highly valued as a living key to processes that shaped life in earth’s ancient seas. The chambered nautilus is a cephalopod mollusc, most closely related to the cuttlefish, squid, and octopus. Virtually unchanged in the last 500 million years, nautilus are considered by some scientists to be “living fossils.” Numerous nautiloid varieties, now extinct, were dominant marine predators before the rise of the fishes. Today, only a handful of nautilus species survive. Paleontologists, ecologists, and physiologists are studying this fascinating mollusc, hoping to gain insight into the marine environment of 500 million years ago and the workings of life forms long extinct.

Living nautilus are now found only in the waters of the tropical Western Pacific, where they live in a little-known marine environment – the deep slopes of coral reefs. Capable of migrating from depths of 1500 feet (450 m) to within 300 feet (90 m) or less of the surface, nautilus have a depth range seen in few other marine organisms and seem capable of tolerating dramatic changes in both temperature and pressure.

The external shell of the nautilus is produced by mantle tissue as in their distant relatives, the snails. But, unlike snails, the nautilus shell is divided into compartments (about 4 in newly hatched specimens, 30 in mature individuals), and the animal occupies only the outer-most “living chamber.” As the nautilus grows, its body moves forward in the enlarged shell and produces a wall to seal off older chambers. In contrast, snail shells are not usually compartmented and the snail’s body extends back to the smallest parts of the spiral shell.

The nautilus shell protects and supports the soft body of this mollusc; the animal can withdraw completely into the shell and close the opening with the leathery hood. But the shell’s most important function is providing this swimming animal with neutral buoyancy. The older, sealed chambers of the shell contain gas which compensates for the weight of the animal’s tissues and shell, keeping the nautilus neutrally buoyant so that it neither sinks nor floats and can move freely in the water.

Nautilus swim in a see-saw motion generated by “jet propulsion.” They alternately pull water into the mantle cavity within the shell and blow it out the muscular siphon beneath the tentacles. By directing the jet of water with the flexible siphon, the nautilus can swim forward, backward or sideways. Like many animals that live in open water or above the reef, nautilus show a form of camouflage coloration called countershading. The upper surface of the shell is darkened by irregular stripes that mask its outline when viewed from above, and the light underside of the shell blends with the water surface when viewed from below.

The Nautilus Body and Lifestyle

Nautilus are predators, feeding on shrimp and other crustaceans that they capture with their 38 or more tentacles. The tentacles are all retractable into sleeve-like sheaths when not in use. Instead of the round suckers found in modern cephalopods like squid and octopus, nautilus tentacles are lined with alternating grooves and ridges that allow them to grip objects. Tentacles handle prey and pass food to the mouth (located within the circle of tentacles) where a beak-like jaw tears it into bites. The file-like feeding structure, the radula, further shreds the food before swallowing.

Unlike their relatives, the squid and octopus, nautilus have poorly-developed vision. The simple eyes, located just below the hood, are hollow bulbs on stalks and contain no lens. Nautilus can probably detect light and dark, but it is not known if their eyes can form images. They probably detect prey using chemical cues, as do many deep-water organisms.