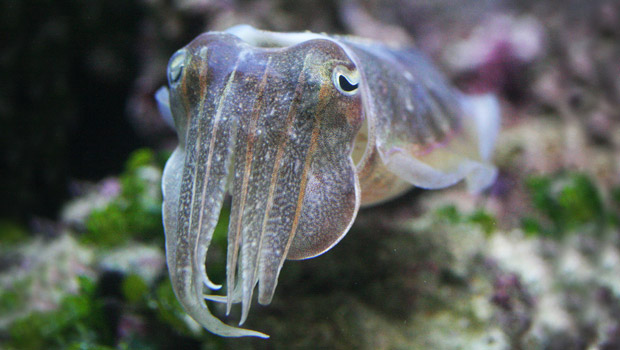 The cuttles (sometimes known as cuttlefish) are not fish, but cephalopod molluscs – most closely related to squid, octopus, and the chambered nautilus. Cuttles share the same basic body design with other molluscs: a head with eyes and other sensory organs; a muscular foot (modified into 10 arms); and a sac-like body mass that encloses the internal organs and gill chamber. The body mass is covered by a muscular layer of tissue called the mantle. In molluscs that have external shells, it is the mantle tissue that produces this external skeleton. The cuttle has an internal shell buried within the mantle tissue, rather than the external shell that characterizes more distant mollusc relatives like the snails and bivalves.

Like squid, cuttles have 10 limbs, all equipped with muscular sucker discs. Eight of the limbs are called arms and are always visible. Two longer limbs, called tentacles, are usually out of sight, retracted into special pouches in the head. Cuttles locate their prey visually and after taking aim, the two long tentacles shoot out rapidly to capture the food and bring it within reach of the other arms. The mouth, located between the arms, contains a parrot-like beak that tears the prey into bites. Cuttles eat reef crustaceans (shrimp, crabs) and small fish.

Cuttles can swim rapidly or slowly by expelling a jet of water from the siphon beneath the head. The skirt-like fin that encircles the body provides stabilization during swimming and undulates to create slow swimming or hovering movements. The chalky, internal shell, called the cuttlebone, contains thin chambers something like those in a chambered nautilus shell. The cuttlebone’s most important function is buoyancy. Chambers of the shell contain gas that compensates for the weight of the animal’s tissues, keeping the cuttle neutrally buoyant so that it neither sinks nor floats and can move freely in the water.

Like other advanced cephalopods, cuttles have a complex brain, well-developed eyes, and elaborate nervous system. They can observe changes in their environment, and then modify their skin color and texture instantly to confuse prey, escape predators, or communicate with other cuttles. The skin contains special color cells called chromatophores. Tiny muscles, activated by the nervous system, expand the cells to darken the skin. When the muscles relax, the cells contract to a smaller size and the skin pales. Different chromatophores contain different color pigments, allowing a variety of color combinations and patterns. The texture or bumpiness of the skin is also controlled by muscles under the direction of the nervous system.

Distribution
Indo-West Pacific, not including Hawai’i