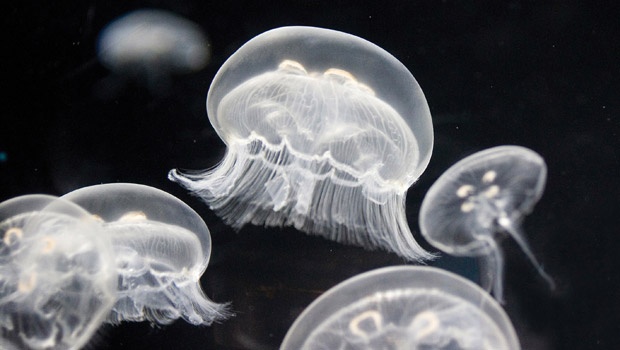 The moon jelly (also known as a jellyfish) belongs to the invertebrate Phylum Cnidaria, a diverse group of stinging animals whose members all possess stinging cells for feeding and protection. Sea jelly relatives include the sea anemones, corals, and Portuguese man-of-war. They are all simple, soft-bodied organisms with just two major tissue layers arranged around a central gut cavity. Individual animals are radially symmetrical, with a ring of tentacles around the central mouth. The tentacles bear stinging cells that are used for food capture and defense.

In the Cnidarians, there are two basic body forms: the polyp form, like the familiar sea anemone, and the free-floating medusa form. Sea jellies, or jellyfish, illustrate the medusa body form: a gelatinous, bell-shaped body with mouth and tentacles hanging down from the undersurface of the bell. The jelly-like central layer of a medusa is 95% water, with protein and elastic fibers for gel and flex. Medusae are not attached to the bottom, but are carried by ocean currents, floating and swimming weakly by means of muscular contractions of the bell. However, the life cycle of most jellies includes a small polyp stage.

The moon jelly, named for its translucent circular bell, is well known worldwide in tropical and temperate waters where it occurs in quiet bays and harbors. The moon jelly’s diet includes micro-plankton, minute crustaceans and fish larvae which it collects as it pulses through the water. The diet of very small prey requires only mild stinging cells; this jelly is harmless to most humans.

At the Waikīkī Aquarium, the moon jellies are fed one to two day-old brine shrimp larvae. The jelly’s upper bell surface is armed with stinging cells and mucus secretions to help trap prey. The captured food is moved to the edge of the bell where the four central arms collect it. As food moves up into the four stomach pouches, you can see the orange-colored brine shrimp right through the transparent body of the jelly. After digestion, nutrients are distributed through the body of the jelly by a system of channels. As simple as the moon jelly is, it does have sensory structures around the rim of the bell. Balance organs and light sensors help the animal sense up and down, light and dark.

The tentacles of sea jellies and other cnidarians are lined with microscopic stinging cells that are activated by touch or chemical cues. Each cell fires a barbed thread that can penetrate the skin and deliver toxin that causes a burning sensation and, sometimes, more severe reactions. The moon jelly, in contrast to the box jelly and some others, has a very mild sting, perhaps a reflection of its diet of microplankton.