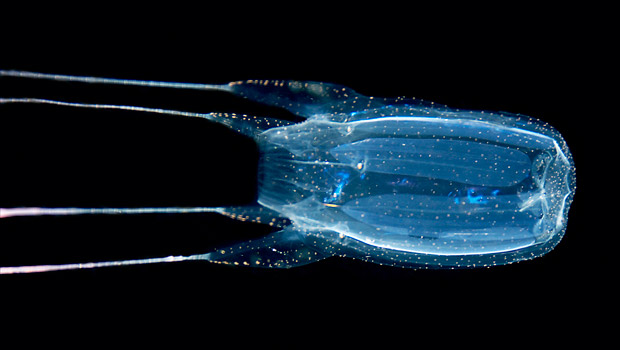 Box jellies (also known as jellyfish) belong to the invertebrate Phylum Cnidaria, a diverse group of stinging animals whose members all possess stinging cells for feeding and protection. Jellyfish relatives include the sea anemones, corals, and Portuguese man-of-war. The box jellies, or Cubomedusae, are named for the squarish shape of their bell-shaped body. At least three species are known in Hawaiian waters, Carybdea alata and a species Carybdea rastoni, and Carybdea Sivickisi. C. alata(winged box jelly) is the largest of the three, reaching sizes of one and a half to two inches and diameter and three inches in height. The smaller species is about a third the size. Each of these box jellies has four thin, pinkish tentacles that trail from the “corners” of the transparent body. Complex sensory structures are located between the tentacles, just above the bell margin; each contains a balance organ and a light detector that includes a lens. Box jellies are capable of directed swimming toward a light source and are reported as the fastest swimmers among the jellies and their relatives. They are active predators, capturing small fishes and crustaceans with their potent sting.

As a group, box jellies are found in shallow tropical seas throughout the Pacific, Indian, and Atlantic Oceans. They generally occur in quiet, shallow waters of protected bays and estuaries, and over sandy-bottomed shorelines, though some species have been reported in the open ocean. Box jellies apparently descend to deeper water during daylight hours, but during summer months, adults are often reported at the surface. The tentacles, well-armed with potent stinging cells can inflict a painful sting on unwary beach goers. An Australian relative, the notorious “sea wasp” box jelly (Chironex fleckeri), is deadly. While the sting of Hawaii’s box jellies is not usually lethal, it is more painful than that of the more common Portuguese man-of-war.

The tentacles of jellies and their relative, the Portuguese man-of-war, are lined with microscopic stinging cells (nematocysts) that are activated by touch or chemical cues. Each cell fires a barbed thread that can penetrate the skin and deliver toxin that causes a burning sensation and, sometimes, more severe reactions. Many lifeguards and doctors recommend rinsing the area with seawater, then applying a paste of unseasoned meat tenderizer and vinegar to the sting – this helps deactivate the toxin. However, sensitivity varies from individual to individual; some may be highly allergic to jellyfish or man-o’-war stings or even to the treatment listed here and need physician’s care. Use this treatment at your own risk, and consult your physician.

The largest of the locally-occurring species, C. alata is identified in the recurring “invasions” that have been reported on O‘ahu shores since late l988. Local water safety officials teamed with marine scientists to find the pattern of occurrence of the jellyfish so that predictions could be made about their probable appearance. More than a year of data revealed a lunar and tidal pattern. The present theory is that when certain high tides occur at night, the jellies are carried over the reef and into the shallows along the beach. When the tide flows out, the jellies are trapped and beach goers encounter them the next morning. Researchers have found that in most cases, the jellyfish “invasions” occur eight to ten days after a full moon.

Still another characteristic of these jellies may hold clues to their recurring appearance. Cnidarians have complex life cycles that include more than one body form, habitat and means of reproduction. Scientists studying C. alata in Puerto Rico found that this jelly gathers by the hundreds to spawn at night during the summer months. After fertilization, minute larval stages are released from the female and drift or settle to the bottom, probably in near-shore areas. There, they attach to hard surfaces and transform into anemone-like polyps about one-sixteenth of an inch high (1 millimeter). The polyps can produce more polyps by asexual reproduction or budding. Each polyp eventually metamorphoses directly into a tiny jelly, or medusa, after about ten weeks. After maturing into adults, box jellies may live for more than a year and probably spawn more than once.