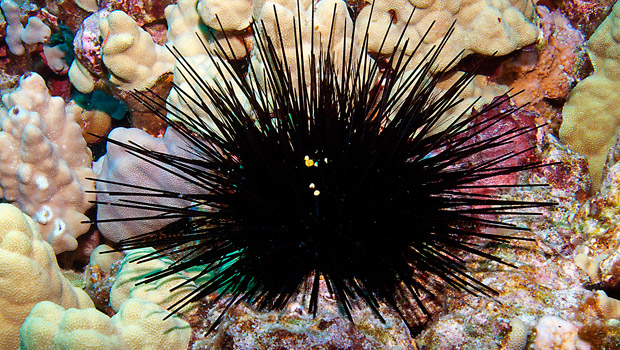 These long-spined sea urchins, known collectively in Hawaiian as wana (pronounced “vah-na”), are found on reef flats and shallow reef slopes, where they are often wedged into crevices in the reef framework. Well-protected from nearly all reef predators, their calcite skeleton, or test, bears two kinds of moveable spines, some up to six inches long. Both the longer, primary spines (which are hollow) and the smaller, secondary spines are brittle and break off after puncturing the skin. The smaller spines bear toxin-producing tissue and contact with them causes burning pain in the wound. Light-sensitive nerves in the urchins’ skin detect the shadows of potential predators and the spines can be coordinated and directed toward the threat. The spines are attached to the skeleton by skin and muscle tissue and do not easily detach. Even light contact with the spines may result in puncture wounds from the spines, but the urchins cannot “shoot” their spines.

The sting caused by the secondary spines is best treated by soaking in hot water to help deactivate the protein toxins, or by soaking in vinegar to help dissolve the spines. Removal of the brittle spines is often unsuccessful since they fracture into small pieces. Left alone, the spines may be gradually absorbed by human tissues – but urchin spine wounds and stings may require a doctor’s care to assure that infection or encapsulation of the spine does not cause permanent damage.

Of the three urchins known as wana, the longest-spined species, Diadema paucispinum, is rather rare. Found in deeper or more protected reef areas, this urchin has bluish-black spines that may reach over 10 inches (25 cm) in length. Echinothrix diadema (smooth-spined) and Echinothrix calamaris (banded) are found on reef flats and occasionally in tidepools. These species may reach six inches in diameter. In younger specimens, the primary spines often appear banded with alternating dark green and white, spines of older urchins appear more bluish-black. Wana, like other urchins are most active at night, crawling over the reef framework as they scrape filamentous algae from the rocks and reef with a jaw made of five teeth. Their nocturnal habits may be an adaptation to avoid day-time predators like the triggerfishes which are known to sometimes feed on the long-spined urchins.