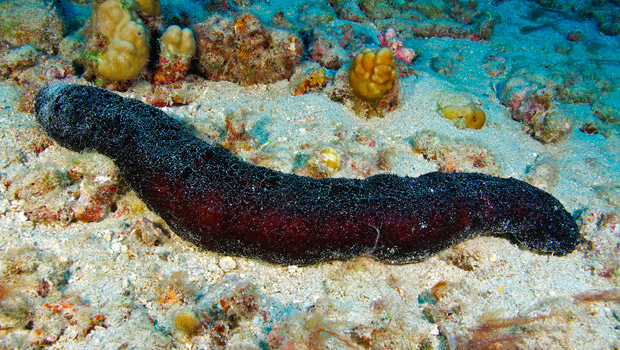 Sea cucumbers are “spiny animals”, members of the phylum Echinodermata and relatives of the seastars and sea urchins. All echinoderms are marine and nearly all are bottom-dwellers. They are unique in having a 5-part body design and a water-vascular system of internal canals which provides hydraulic power for their many muscular tube feet.

Sea cucumbers differ from other echinoderms in having an elongate, cylindrical body with the mouth and anus at opposite ends. Because their body is muscular and soft rather than spiny, sea cucumbers are sometimes confused with sea slugs (snail relatives that lack a prominent shell). An easy way to tell them apart is to look for a head. Sea slugs, like snails, have a head with sensory tentacles. Sea cucumbers, like other echinoderms, lack a distinct “head”. Instead, the mouth end of a sea cucumber is ringed by 5 feeding tentacles used in gathering food particles. Sea cucumbers either gather detritus (bits of plant and animal matter) and bacteria from seafloor sediments or filter particles from the water.

The skeleton and spines that are so prominent in other echinoderms are reduced in sea cucumbers. Instead of a rigid skeleton, sea cucumbers have a muscular body well that contains only microscopic skeletal ossicles. The muscular body wall provides support, and so does the water inside the cucumber’s large body cavity. This “water skeleton” also acts like a circulatory system.

Like other echinoderms, nearly all sea cucumbers have tube feet. The suckered tube feet are important for both attachment and movement. In many species, the tube feet are all found on one side of the animal, providing greater grip in wave-swept habitats. One group of sea cucumbers (synaptid cucumbers) lack tube feet all together and move by muscular waves which pass down the length of the body (peristalsis). They are found in quiet-water habitats.

Sea cucumbers may lack spines and the protection of a rigid skeleton, but they have many different means of defense from predators. With soft, flexible bodies, they are able to crawl under rocks and into reef crevices. Some species have repellant or toxic chemicals in the skin that make them distasteful.  Others eject sticky threads (Cuvierian tubules) from the anus — these threads entangle and immobilize potential predators and the cucumber crawls to safety.  Still other sea cucumbers can eject (eviscerate) part of the digestive system as a defensive mechanism, regenerating lost parts later.

Like most echinoderms, sea cucumbers reproduce sexually and many are broadcast spawners. Males release sperm and females release eggs into the water and fertilization is external. The result is a barrel-shaped planktonic larva that drifts in plankton before settling to the seafloor and metamorphosing into a benthic (bottom-dwelling form). A few sea cucumber species retain the young and brood them until they emerge as crawling juveniles. Some species have also been reported to reproduce by fission (splitting in half), a form of asexual reproduction

Sea cucumbers play an important role in reef “recycling”. They feed by gathering organic detritus and even bacteria from the water or the sand.  They speed the breakdown of these bits of plant and animal debris — extracting energy for their own survival and recycling materials that seaweeds can absorb as fertilizers. The sand that sea cucumbers process along with the detritus they consume is eliminated as strings of sandy beads.This processing helps “turn over” sediments.