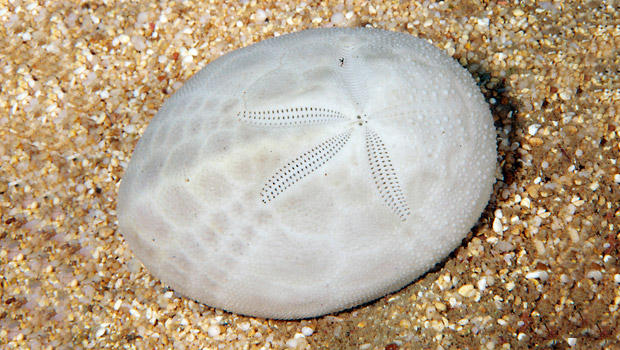 Sea urchins are among the most conspicuous invertebrates on Hawaiian shores and reefs. Their spines have earned them familiarity and notoriety among fishermen, surfers, divers, snorkelers, and tidepoolers alike. Their nearly spherical shapes have earned them a classification as “regular” urchins.

The more unusual and delicate “irregular” urchins are far less familiar to most ocean users. The heart urchin (Brissus latecarinatus) and its flattened relatives, cake urchins, biscuit urchins and sand dollars, are sand dwellers. Their bodies are streamlined, designed for burrowing like a rounded wedge or a disc. Their abundant spines are very small and fine (and usually missing by the skeletons are discovered).

In Hawaii, heart urchins are reported from sandy-bottomed areas on the outer reef border, usually in about 6 to 12 feet of water. The internal skeleton, or test, made of fused plates of calcite (calcium carbonate). Living specimens are light brown or green, covered with thousands of short, delicate spines that form a dense, almost fur-like, covering over the test. Movement of these spines in ball and socket joints powers the heart urchin’s burrowing, and the rounded wedge shape reduces resistance as the urchin plows through the sand. The tube feet are not used in movement and are found in only two areas of the body: specialized podia around the crescent-shaped mouth gather food particles from the sand; and tube feet in the petal-shaped zone on the top of the test are important in respiration. Heart urchins feed on small food particles and lack the heavy jaw apparatus seen in the reef-dwelling urchins that graze on tougher seaweeds.

This species of heart urchin is found throughout the Indian and Pacific Oceans, from Mauritius to the coast of Central America. In Hawai‘i, specimens can reach six inches in length and four inches in diameter. Larger specimens have been reported elsewhere in the Pacific.