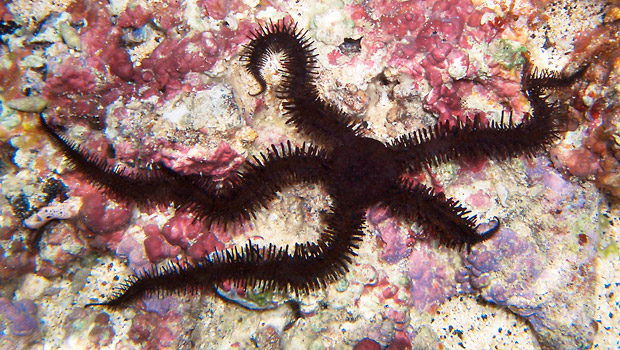 Brittle stars resemble their relatives the seastars but are different and are in a separate class. Brittle stars have five jointed arms and a rounded central disc that contains their vital organs. Brittle stars are named for their ability to autotomize or voluntarily drop their arms if attacked by a predator. Arms can be dropped at any of the multiple joints along the length of the arm. Missing arms are replaced by regeneration, a process that probably takes weeks.

Brittle stars are very active and are common in tide pools and on reef flats, living under rocks or in crevices with only the tips of the arms exposed. They are sensitive to light, scurrying for cover when exposed. The arms and central disk are covered with tiny transparent calcite crystals which act to focus light onto light-sensitive tissues underneath, forming an array that functions as a single eye! The arms also have spines along the sides, which are used in movement, gripping the bottom as the brittle star pulls itself along with a “rowing” motion. Tube feet are located on the undersides of the arms but lack sucker discs and are not used in movement.

Brittle stars feed on bottom detritus or on particles floating in the seawater. The tube feet gather the food particles and transfer them to the mouth on the underside of the central disc. The mouth, with 3 triangular teeth, leads to a sac-like stomach, but there is no anus and any undigested material must pass back out of the mouth.