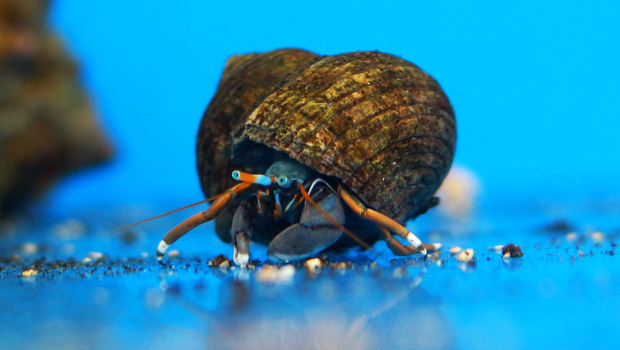 Hermit crabs and their relatives are called anomurans and are different from the “true crabs” because they have a reduced and softened abdomen. Hermit crabs protect this vulnerable part of their body by using an empty snail shell as extra armor. The hermit crab’s abdomen is curved to fit the shell and small hook-like limbs anchor the crab’s body within the shell. Hermit crabs have 5 pairs of legs, the first pair is modified into claws and the last two pairs help them hold onto the shell. When a hermit crab outgrows its shell, it must find another larger one. While hermit crabs may pull one another from desirable shells, it is rare for them to kill a snail to obtain a shell. When a hermit crab locates a shell, it carefully checks the inside and outside of the new prospect with its antennae and claws. Then, releasing its anchoring limbs from the old shell, it slips its abdomen out of the old shell and into the new one. If the fit is good, the hermit is on its way – it not, it quickly transfers back to the old shell.

There are over six species of hermit crabs found in Hawaii’s tide pools and reef shallows, each distinguishable by the colors of its eyes, antennae, legs, and claws. One of the most common is the Left-handed tide pool hermit crab, Calcinus laevimanus. This species has a large black and white left claw which they use as a door to seal off the shell for added protection. The Left-handed hermit crab uses the shells of many different species of seashells but is frequently found in the shells of pipipi (nerite), top, or turban snails. The number of available shells in the tide pool or reef flat is very important to the survival of tide pool hermit crabs and can limit their numbers. So, please leave all seashells, even empty ones, in the sea where hermit crabs can reach them.

As in most other crustaceans, hermit crabs are male or female. After mating, female hermit crabs carry their eggs attached to tiny limbs on their abdomen. The minute young hatch as larvae and are swept into the plankton; in this drifting stage, they look more like tiny shrimp than hermit crabs! The larvae feed and grow as they drift in ocean currents. When they have reached the right stage of development, they drop to the seafloor and metamorphose (transform) into their bottom-dwelling form and must immediately find a small snail shell for protection.

Hermit crabs are omnivorous, feeding on both plant and animal materials. Despite the protection of their borrowed shells, they are preyed upon by larger hermit crabs, box crabs, octopus, as well as wrasses and other reef fishes with jaws for crushing shelled invertebrates.

These familiar tidepool residents are members of the large invertebrate Phylum Arthropoda which includes crabs, as well as the land-dwelling insects, and many other groups. Like all arthropods, hermit crabs have jointed limbs and segmented bodies. As members of the Subphylum Crustacea, the most prominent arthropod group in the ocean, hermit crabs share several features with their closest relatives, the shrimp, lobsters, and true crabs: they all have three body regions, a head, thorax (mid-body), and abdomen; 2 pairs of antennae; crushing mouth parts called mandibles; and a hard external skeleton.