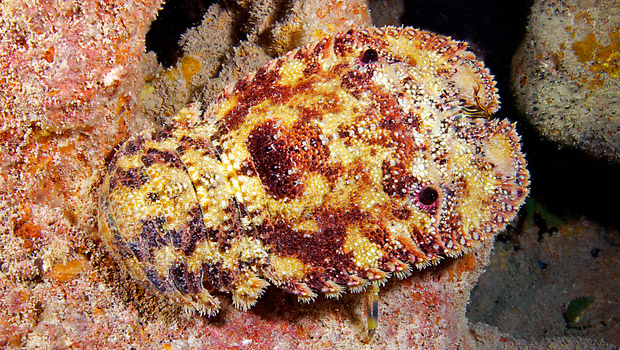 Slipper lobsters, like the spiny lobsters and do not have large claws. Any resemblance ends there. The body is flattened and shovel-like extensions at the head are modified antennae. Eyes are recessed in sockets within the head.

During the day, slipper lobsters live in caves and crevices in the reef. Flattened bodies allow them to cling closely to the rock walls or roofs of caves, and the drab coloration blends with the surroundings so that they are generally difficult to see. At night, slipper lobsters emerge from shelter to forage over the reef. As carnivores they use their jaws and limbs to crack open living snails and oysters, others eating sea anemones. They also take advantage of carrion and will scavenge on dead animal matter.

Like other crustaceans, slipper lobsters have an external skeleton (exoskeleton) that encases them like armor. This hardened skeleton provides protection, as well as support for their organs and attachment for their muscles (which are on the inside of their skeleton!). In order to grow, the skeleton must be shed and a new larger skeleton produced. This shedding process is called “molting.” To prepare for molting, the lobster produces a new, but soft, skeleton beneath the old one. When ready, the old skeleton splits where the main part of the body (carapace) meets the tail (abdomen). The lobster pulls out of the old skeleton, and before the new skeleton hardens, the lobster enlarges it by swelling its skin cells with water. While the lobster’s skeleton is soft, it is very vulnerable to attack by predators, including other lobsters – so newly molted lobsters generally find shelter deep within the reef. Once the new skeleton is hardened in the larger size, the excess water in the cells can be eliminated and there is room for the body to grow within the exoskeleton.

During the reproductive period which occurs during summer, male lobsters seek out females, possibly following the scent of attractant chemicals called pheromones. The males attach a sticky packet of sperm near the female’s reproductive opening and her eggs are fertilized as they leave her body. The female attaches the fertilized eggs to the delicate limbs on the underside of her abdomen. She aerates the developing embryos by fanning her abdominal limbs through the water and cleans them using special claws on her last pair of walking legs. Females with eggs are called “berried” females because the eggs resemble tiny, reddish or blackish berries. The embryos hatch months later and take up life in the plankton as wafer-thin phyllosome larvae. The larvae spend up to 9 months in the plankton before settling out to begin life on the bottom.

Slipper lobsters are edible but are not present in sufficient numbers to support a commercial fishery. Recreational fishermen take them in small numbers by hand. To protect the population, fishing regulations include: a limited fishing season (September-April); size restrictions; no berried females may be taken, and slipper lobsters may not be captured using spear guns. For the most current information on Hawai‘i Fishing Regulations, contact the Hawai‘i Division of Aquatic Resources.