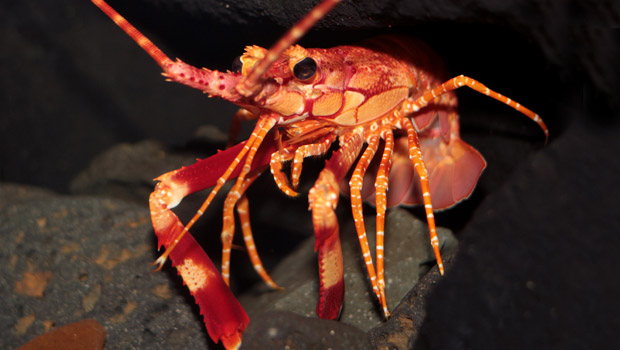 The long-handed lobster, Justitia longimana, is an uncommon species. It lives hidden under ledges or in caves on the outer reef edge of Hawaii’s slopes, at depths below 60 feet (18 m). Under illumination, its body appears brilliant orange-red with white and red banding on the antennae. But at depth, these colors appear gray to black, providing camouflage for life in the twilight realm of the deep reef slope. The lobster’s large and darkly pigmented eyes also appear well-suited for the low-light environment, and the long antennae provide important sensory information. These well-armored relatives of the Hawaiian spiny lobster have a large curved spine over each eye, as well as spines over the carapace and the sides of the abdomen.

This lobster’s scientific and English names refer to its elongated first pair of legs. In males, the tip of the leg ends in a claw with a downward-closing tip. The function of the claw is not clear, but females lack this claw-like appendage, having a simple pointed leg tip instead. Despite the presence of this claw, the long-handed lobster is not related to the American or Maine lobster of North America.

Like other crustaceans, the long-handed lobster has an external skeleton (exoskeleton) that encases it like armor. This hardened skeleton provides protection, as well as support for the organs and attachment for the muscles (which are on the inside of their skeleton!). However, in order for the lobster to grow, the skeleton must be shed periodically and a new larger skeleton produced. This shedding process is called “molting.” To prepare for molting, a lobster produces a new, but soft, skeleton beneath the old one. When ready, the old skeleton splits where the main part of the body (carapace) meets the tail (abdomen). The lobster pulls out of the old skeleton, and before the new skeleton hardens, the lobster enlarges it by swelling its skin cells with water. While the lobster’s skeleton is soft, it is very vulnerable to attack by predators, including other lobsters – so newly molted lobsters generally find shelter deep within the reef. Once the new skeleton is hardened in the larger size, the excess water in the cells can be eliminated and there is room for the body to grow within the armor-like exoskeleton during the coming season!

This deep-water lobster lives in waters as shallow as 45 feet to depths greater than 900 feet (14 to 270 m). It appears to have a spotty, worldwide distribution. It has been found in Bermuda in the Atlantic, among the islands of the West Indies in the Caribbean, off Mauritius in the Indian Ocean, and in the Hawaiian Islands. Its distribution elsewhere is not well known.

Because it is difficult to study, relatively little is known about this striking lobster. Based on its habitat, mouth parts, and relationship to spiny lobsters, researchers speculate that it probably forages at night, preying on small reef invertebrates or scavenging larger animal carrion.