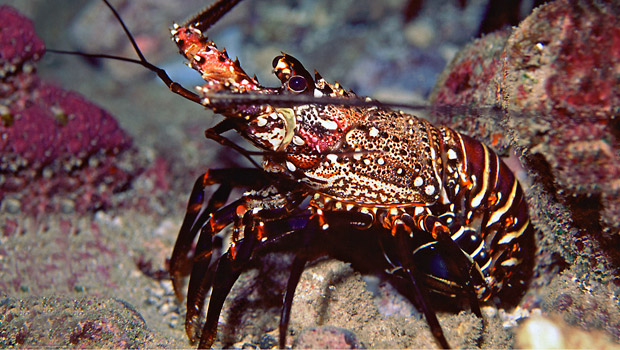 Hawaiian spiny lobsters are important predators and scavengers in the reef community. They are usually found under ledges or in caves with only their long antennae sticking out. These large crustaceans use sound to warn other lobsters, and even human divers, away from their shelter on the reef. The lobsters produce a grating or buzzing noise by rubbing hard pads at the base of the antennae against special ridges on their head – an activity called stridulation. Lobsters remain in their shelters during the day and emerge at night to forage on the reef.

Spiny lobsters do not have the large claws seen on the American (Maine) lobster and freshwater crayfish. Instead, for defense, spiny lobsters rely on sharp, forward-pointing spines that cover their antennae and upper body surface. Their habit of living deep within crevices or caves in the reef also protects them from many potential predators. Powerful muscles in the abdomen (tail) are important in quick, backward escapes that carry them away from predators.

Like other crustaceans, spiny lobsters have an external skeleton (exoskeleton) that encases them like armor. This hardened skeleton provides protection, as well as support for their organs and attachment for their muscles (which are on the inside of their skeleton!). But, in order to grow, the skeleton must be shed periodically, and a new larger skeleton produced. This shedding process is called “molting.” To prepare for molting, the lobster produces a new, but soft, skeleton beneath the old one. When ready, the old skeleton splits where the main part of the body (carapace) meets the tail (abdomen). The lobster pulls out of the old skeleton, and before the new skeleton hardens, the lobster enlarges it by swelling its skin cells with water. While the lobster’s skeleton is soft, it is very vulnerable to attack by predators, including other lobsters – so newly molted lobsters generally find shelter deep within the reef. Once the new skeleton is hardened in the larger size, the excess water in the cells can be eliminated and there is room for the body to grow within the exoskeleton during the coming season.

During the reproductive period which occurs during summer, male lobsters seek out females, possibly following the scent of attractant chemicals called pheromones. The males attach a sticky packet of sperm near the female’s reproductive opening and her eggs are fertilized as they leave her body. The female attaches the fertilized eggs to the delicate limbs on the underside of her abdomen. She aerates the developing embryos by fanning her abdominal limbs through the water and cleans them using special claws on her last pair of walking legs. Females with eggs are called “berried” females because the eggs resemble tiny, reddish or blackish berries. The embryos hatch months later and take up life in the plankton as wafer-thin phyllosoma larvae. The larvae spend up to 9 months in the plankton before settling out to begin life on the bottom.

Spiny lobsters are a popular food item in Hawai‘i as well as elsewhere in the Pacific. Commercial fishermen catch them using baited wire traps set on the seafloor. Recreational fishermen, scuba divers, and snorkelers around the main Hawaiian Islands must capture lobsters by hand (no nets are spears are allowed).  To ensure that lobster populations stay balanced and capable of replacing themselves, State of Hawai‘i fishing regulations protect both smaller lobsters and reproductive females. Only lobsters above a certain legal size may be taken. And, because of the long reproductive period, it is illegal to catch spiny lobsters during the summer months (May through August). Females with eggs are protected throughout the year. For the most current information on Hawai‘i Fishing Regulations, contact the Hawai‘i Division of Aquatic Resources