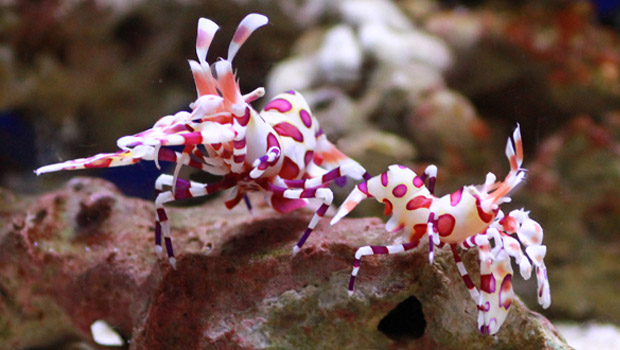 This distinctive spotted shrimp has flattened claws on the ends of its first pair of walking legs. These claws are important in its unusual feeding habit — harlequin shrimp are specialized predators on certain kinds of seastars. They primarily eat Linckia seastars. The shrimp presumably locate their prey by smell, using the petal-like sensory antennules on the head. Some researchers report that after following the scent to the seastar, the shrimp grasps one of the star’s arms with its walking legs, and by doing a “hand stand” on the two large claws, it lifts the seastar’s arm from the bottom. The shrimp then crawls underneath, completely overturning the star. These slow-moving seastars are then vulnerable and the shrimp can feed on the tube feet and soft tissues by piercing the tough skin and internal skeletal framework with specialized claws and feeding limbs.

Harlequin shrimp live well below the intertidal zone on coral reefs in Hawai‘i and throughout the Indo-Pacific, but are relatively rare on any reef. Individuals rarely exceed two inches in length, and they are often found in male-female pairs. This ornate species is highly prized by aquarists, despite its need for a specialized diet of live seastars.

The harlequin shrimp is a decapod crustacean; it belongs to a group that includes many familiar shrimp and prawns, as well as the lobsters, crabs, and hermit crabs. All crustaceans are members of the Phylum Arthropoda, the animal grouping that is characterized by having an external skeleton and jointed limbs.