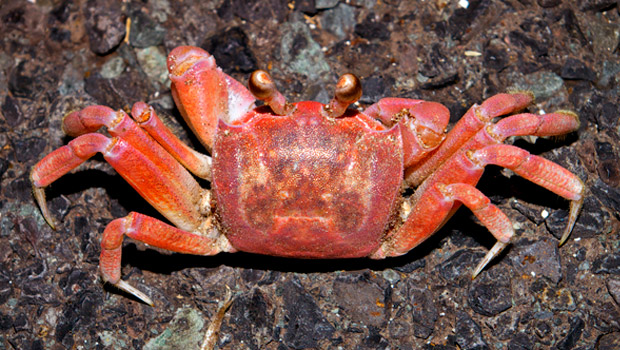 These active crabs inhabit sandy beaches just above the waterline. Most active at night, ghost crabs spend the day in spiral burrows where the insulating sand keeps them moist and cool. Adult crabs become active at dusk, digging and repairing their burrows. Young crabs, an inch or less across are seen on the sand surface both night and day, perhaps because they are not yet large enough or strong enough to dig their own burrows. Ghost crabs are well named, for they seem to “disappear” – their pale colors match the sand on which they live, and they dart quickly down into burrows at any sign of disturbance.

Ghost crabs live alone in their sandy shelters, and you can tell a lot about each resident by the way their burrow is built. The size of the burrow opening indicates the size of the crab that lives in it. Reproductively mature male ghost crabs arrange the sand they’ve excavated from their burrow into a neat pyramid-shaped pile next to the entrance (and you can often see their “foot-prints” between the burrow entrance the pile). But, females and young individuals just scatter the sand in all directions outside their burrows. Just looking down the beach, you can see where the males’ burrow are – this may be very important to the crabs at mating time, when females need to identify the location of potential mates. Males can also be identified by the “horn” at the end of their stalked eyes.

Ghost crabs communicate with one another using more than just visual signals, they can make sounds. A special structure on the inside of the crabs right claw looks a little like a wash-board, it’s called a stridulating organ. When the crab rubs this structure against a ridge located at the base of that leg, they create a “creaky” sound. Some researchers propose that they use this sound to warn other crabs from entering their burrow; others suggest that male crabs might use the sound to attract females.

Ghost crabs are true marine organisms and can survive underwater. When they are foraging at night, they can frequently be found along the waterline, even in the water. They are able to spend most of their time above the reach of the sea because they have a water-tight external skeleton that prevents water loss from their tissues and keeps them from drying out. A specially-designed gill chamber lets them “breathe” air as long as their gills stay moist, either in the humid shelter of their burrow by day or by periodically wetting their gills with trips to the waterline at night.

Ghost crabs are scavengers and run up and down the beach in search of food. They will eat plant or animal material washed ashore by the waves and tide, including beached Portuguese man-of-war, stinging tentacles and all. The armor-like external skeleton that encases the crab covers its mouthparts too, so that they are probably not affected by the man-of-war’s stinging cells.

Like their relatives, ghost crabs have a total of 10 jointed legs. Two of their legs are tipped with claws (one always larger than the other) for feeding and digging their burrows. The other four pairs are slender, pointed legs for walking and running on the sand, and they’re also used to help pull the sand out of the burrow as the crab excavates. Because ghost crabs’ legs are set very close together and the joints only bend in certain directions, the crabs can only walk or run sideways.

The crab’s armor-like external skeleton protects it from drying and gives its organs and muscles support, but it is so rigid that the crab cannot grow without shedding it. Crabs and the other crustaceans have a special way of growing, called molting. Periodically, they produce a new soft skeleton underneath their hard, but too-small one. Then, the old skeleton cracks open along the back end of the body and they squeeze themselves out of it. Before the new skeleton can harden, the crab expands it to gain some growing room – kind of like buying a pair of shoes one side too large. Once the new, larger skeleton has hardened, the crabs can once-again begin actively foraging.

Early Hawaiians ate ghost crabs, called Ōhiki, salted, raw or broiled. Care was taken not to eat too much because this could cause stomach upsets.

Size
to 3 inches (across)