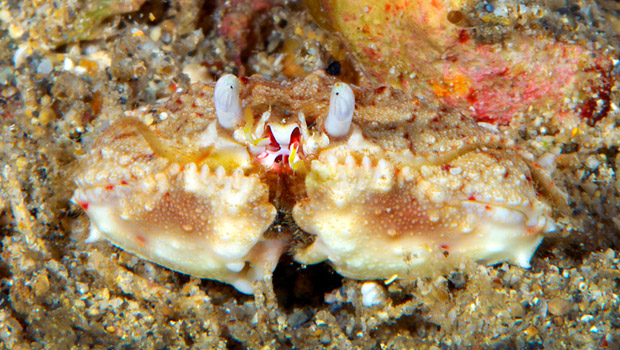 Box crabs are named for their distinctive shape and design. Their rounded, dome-shaped carapace is usually broader than it is long with wing-like side extensions that conceal the four pairs of walking legs. The broad, flat claws are held like shields, protecting the crab’s front surface and completing the box-like appearance. The claws’ shielding posture gives rise to another common name for this group, “shame-faced crabs”.

Box crabs are common on shallow sandy flats and in sandy patches on the coral reef. They spend much of their time buried in the sand with only their sensory structures and respiratory opening at the surface. When foraging for food they walk freely over the bottom on sharply pointed walking legs. There are several species of box crabs in Hawai‘i, they range in size from less than 3 to about 6 inches in width.

The largest species of box crab is Calappa calappa, whose smooth, cream-colored carapace is marked by dark spots and wavy horizontal lines. It can reach a width of 6 inches. This species is found on sandy bottoms from depths of 25 to over 150 feet. The more common box crab in Hawaii is the hepatic box crab, Calappa hepatica. Its oval carapace is mottled tan and white and is covered with raised knobs. This species is 3 to 4 inches wide and is most commonly found from the water’s edge on shallow reef flats to depths of 150 feet. A smaller species, the 2-horned box crab, Calappa bicornis, reaches only 2 1/2 inches. This species has a nearly circular carapace covered with distinctive sculpturing of raised bumps and deep depressions. This crab is usually found in sandy patches on the outer reef edge.

Box crabs are efficient burrowers and dig into the sand rapidly: alternating, they push the sharp back edge and sides of the carapace down and backward into the sand, then shove the flattened claws forward against the sand. Once buried, the claws are held tightly against the front of the body and the incoming respiratory water current is filtered through hairy inner edges of the claws. Ridges between the eyes form two tube-like channels through which water is drawn down to the gill chamber within the carapace.

The out flow of expired water can be seen as a small fountain of water arching from the front of the crab’s head. The armored body seems well designed for defense as well as digging. The eyes, antennae, and respiratory openings are located on the highest points of the carapace, allowing the rest of the crab’s body to remain hidden from predators. The crab’s mottled or sandy color blends with the background and gravel in which it lives and makes the animal difficult to see unless it moves. The wing-like extensions of the carapace extend over the walking legs. And, the large flattened claws protect the head and delicate feeding structures from predators and abrasive sand.

The claws or chelipeds of the box crab are specialized tools for feeding on snails. The right and left claws are equally sized, but of different design. The right claw is equipped with a pronounced hook and heavy crushing knobs and functions somewhat like a can opener. The hook is inserted into the opening of a snail’s shell and the edge of the shell is crushed between the knobs. The box crab snips more and more of the shell until the soft body of the prey is exposed. The left claw is more delicate, with a pointed, moveable pincer that is used to pluck the flesh from the crushed snail. Some of the most common prey includes auger snails that also live in sandy-bottomed areas. Box crabs, like most crustaceans, are probably most active at night, but can sometimes be seen during the day.