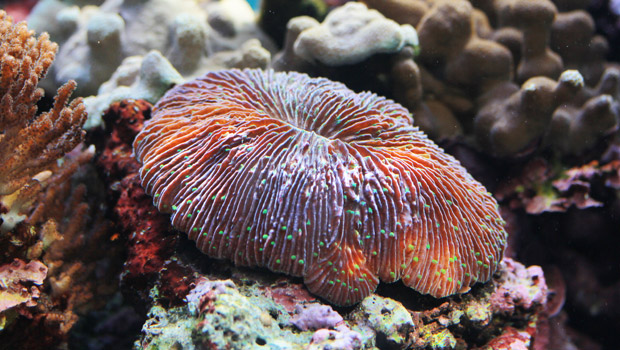 The mushroom coral is one of the most recognizable species of Hawaiian stony corals. It is named for its oval shape and the radiating skeletal walls (septa) that give this coral its mushroom-like appearance. These sharp septa also give rise to another common name, razor coral. This disc-like coral is found on quiet water reefs like those in Kāneʻohe Bay, where solitary individuals live detached from the reef. Mushroom corals do not form colonies like most other Hawaiian corals, each mushroom coral is a single polyp.

In a mushroom coral, the central mouth is slit-like and the broad polyp surface is covered with widely spaced, stubby tentacles. Mushroom corals are suspension feeders and have tracts of hair-like cilia on the disc surface that collect particles dropping from the seawater. The cilia carry food particles to the mouth and carry sand and other non-food particles to the edge of the disc to dump them. As in other reef-building corals, there are symbiotic algal cells (zooxanthellae) living inside the mushroom coral’s cells. Using nutrients from the water and their coral hosts and sunlight, the zooxanthellae generate energy-rich compounds through photosynthesis. In fact, reef-building corals actually owe their success as builders to their tiny partners; the zooxanthellae’s photosynthetic processing enhances the corals’ abilities to produce the massive limestone skeletons that contribute to the reef framework. The formation of extensive reef environments would be impossible without this mutually beneficial relationship.

Tissue remaining on the pedestal can grow to create another mushroom coral which will break off as well. This is like the budding process that creates colonies in other corals, but in the mushroom coral, the polyps don’t remain attached to one another. A single pedestal can generate many mushroom corals. The pedestal arises from an original mushroom coral larva that settles on the reef. Adult mushroom corals release eggs or sperm into the seawater when they spawn. When these unite in fertilization, a larval stage called a planula develops. Carried by currents, the larva drifts until it settles onto a reef surface and starts the cycle of polyp formation.

Early Hawaiians used the skeleton of the mushroom coral as an abrasive for polishing canoes and other woodwork and for removing bristles from a pig skin before cooking.