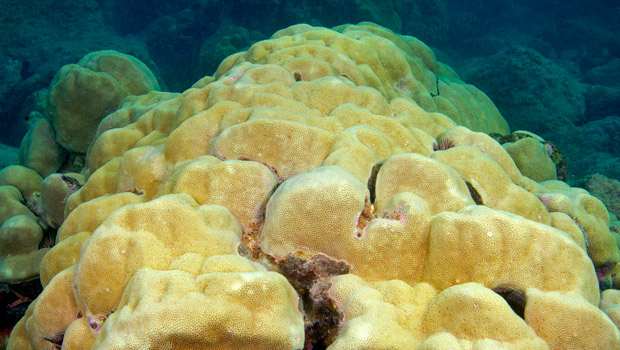 Lobe coral is one of the four most prominent reef-building coral species in Hawai‘i. Found throughout the Indo-Pacific region, this surge-tolerant coral can be found in a variety of habitats, from tidepools to depths of 150 feet (45 m). It is most common, however, on wave-exposed reef slopes between 10 and 45 feet (3 to 14 m) deep, in a zone below the cauliflower coral.

Depending upon environmental conditions, lobe coral can be found in a variety of growth forms, from thin, bottom-hugging crusts to huge solid domes more than 20 feet (6 m) across. This massive coral grows more slowly than branching forms, adding a fraction of an inch (about 1 cm) per year to its dimensions. But, colonies may live for many years and can grow to immense sizes. Despite the massive size of some colonies, however, only the outermost four one-hundredth of an inch (1 mm) is actually living coral tissue.

Individual coral organisms, called polyps, are simple vase-shaped creatures. Each has a central mouth, surrounded by a ring of tentacles. Lobe colonies consist of thousands of polyps, all descendants of one original founding individual. The polyps of a colony are connected to one another by both their skin-like layer and sac-like gut cavities.

Many corals can function as carnivores, using their tentacles to capture small planktonic animals drifting over the reef. Special stinging cells that line the surfaces of the polyps’ tentacles entangle and paralyze their prey. Other corals are suspension feeders, using hair-like structures called cilia to collect particles of organic matter that drift down from above. The polyps of lobe coral are so small that researchers question if they are actually capable of capturing prey.

But, corals also act as primary producers. Single-celled algae called zooxanthellae live within the tissues of reef-building corals in a symbiotic relationship. Using sunlight and nutrients from the water and their coral hosts, zooxanthellae generate energy-rich compounds through photosynthesis. These carbon-rich products may be particularly important in the energy budget of lobe coral.

Scientific name
Porites lobata and others