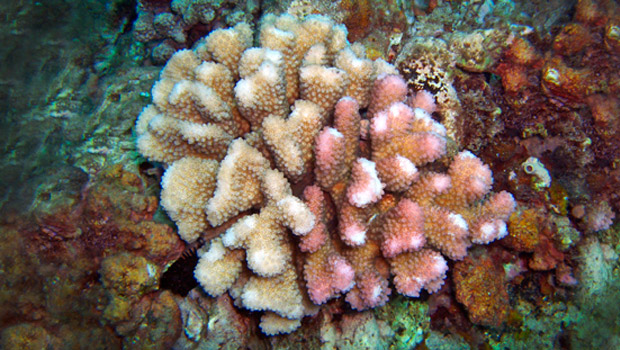 One of the four most abundant species of Hawaiian reef-building corals, the cauliflower coral is a surge-tolerant species that inhabits exposed shorelines and the surge zone of reef slopes. Its dense skeleton, sturdy branches and symmetrical head formation suit it to moderate wave action encountered close to the surface. It is the dominant coral species on reef slopes at depths of less than 10 feet (3 m), but can also be found to 90 feet (27 m) or more.

A cauliflower coral head is a colony of minute animals called coral polyps that make up the living animal tissue. Each polyp, only 0.04 inches (1 mm) across, is shaped like a small sea anemone, and sits in a protective cup called a corallite in the hard coral skeleton. The polyps of a colony are connected to one another by both their skin-like layer and sac-like gut cavities. The polyps remove dissolved minerals from the seawater and deposit them as calcium carbonate (limestone) to produce the stony skeleton. As coral colonies grow, producing additional polyps and skeleton, they add more bulk to the reef. Despite the size of some coral colonies, however, only the outermost fraction of an inch (few mm) is actually living coral tissue, a total of 4 cell layers thick.

The cauliflower coral, also known as head coral and rose coral, ranges in color from golden brown to pink. Its branches provide shelter for a variety of other organisms, such as crabs and small fishes. Unlike many colonial corals, cauliflower coral heads appear to have a fixed size – colonies reach a maximum size of 12 -15 inches (30-38 cm).

Cauliflower corals can function as carnivores, their polyps have tentacles to capture small planktonic animals drifting over the reef. Special stinging cells, lining the surfaces of the polyps’ tentacles, entangle and paralyze their prey. But reef-building corals like the cauliflower coral function not only as consumers, but also as producers on the reef. Single-celled algae called zooxanthellae live within the tissues of the cauliflower coral in a symbiotic relationship with their animal hosts. Using sunlight and nutrients from the water and their coral hosts, the zooxanthellae generate energy-rich compounds through photosynthesis. In fact, reef-building corals actually owe their success as builders to their tiny partners; the zooxanthellae’s photosynthetic processing enhances the corals’ abilities to produce the massive limestone skeletons that serve as the reef’s framework. The formation of extensive reef environments would be impossible without this mutually beneficial relationship.

Early Hawaiians had several uses for the hard skeleton of cauliflower coral. Its rough surface made it ideal as an abrasive, and pieces of skeleton were used like sand paper to file or sand wood objects. Cauliflower coral, called ko’a in Hawaiian, was also important in building heiau (temples) dedicated to fishing.

In 2018, the Center for Biological Diversity petitioned National Marie Fisheries Service (NMFS) to have cauliflower coral listed under the Endangered Species Act. In Hawai‘i, cauliflower coral has experienced high bleaching prevalence and subsequent mortality due to abnormally high ocean temperatures from 2014-2017. These events and other stressors have left this coral imperiled throughout a significant portion of its range in Hawai‘i.   If listed, it will be the first Hawaiian coral to receive protection under the Endangered Species Act.