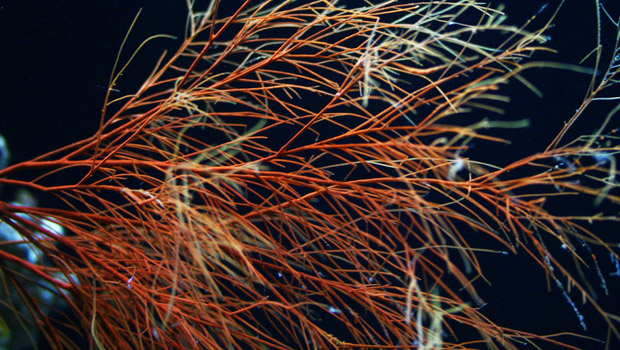 Black corals, or antipatharians, are colonial animals, related to sea anemones and stony corals. They are named for the color of their stiff, black or brownish skeleton. Tiny spines found on the surface of the skeleton are distinctive among corals, and antipatharians are sometimes referred to as “little thorn corals”. The skeleton, often seen in jewelry, is relatively familiar, but the living coral that produces it is not. A thin veneer of animal tissue, called the cenosarc, secretes the tightly-layered central skeleton of horn-like protein. Depending upon the species, the living tissue may be black, red, orange, brown, green, yellow, or white. The gelatinous polyps located in this living “bark” are short and cylindrical, their six, non-retractable tentacles are armed with stinging cells.

Black corals are found in all oceans, but are most common in deep water habitats of tropical and subtropical seas. Some may occur on reef slopes in water as shallow as 3 to over 300 feet (1-110 meters). Others have been recorded from depths up to nearly 20,000 feet (4,000-6,000 meters). Colonies are frequently found near drop offs, terraces or ledges that are swept by swift currents. Their abundance may be related to available space in favorable conditions. Light and water movement appear to play important roles in the distribution of some species, including Antipathies grandis off the coast of Hawai’i. Research suggests that black coral larvae may settle and survive best under low light levels and this may explain the greatest abundance of black corals below about 120 feet (35 m). Colonies that occur in shallower habitats are usually found in shaded areas or where light penetration is reduced.

Black corals are carnivores. Firmly attached to the seafloor, colonies are swept by swift currents which move animal plankton over the polyps. The fan-like growth patterns that characterize colonies of some species are thought to be an adaptation for efficient feeding in a unidirectional current flow. The branches of many species appear to have polyps on one side only (the downstream side), also a possible nutritional adaptation. Unlike reef-building corals in the shallower waters above, black corals lack symbiotic algae (zooxanthellae) in their tissues. This means they are not limited to sunlit reaches of the reef and so often occur in caves and under ledges, as well as at great depth.

Relatively little is known about the life cycle and reproduction of black corals. Like other cnidarians, black corals have life cycles that include both asexual and sexual reproduction. Asexual reproduction (budding) builds the colony by adding more living tissue that, in turn, secretes more skeleton. Regular growth rings laid down as the skeleton thickens can be used to estimate the age of the colony. Sexual reproduction involves the production of eggs and sperm to create young that can disperse and settle new areas. Polyps are either male or female, but a single colony may be hermaphroditic, with both male & female polyps. The larval stage, called a planula, can drift with currents until a suitable surface is found. Once the larva settles, it metamorphoses into a polyp form and secretes skeletal material that attaches it to the seafloor. Then it begins budding, creating more polyps that will form a young colony. Asexual reproduction can also occur naturally by fragmentation of branch ends. In one Hawaiian species that have been studied the colony may grow about 2.5 inches (6.4 cm) per year. Reproductive maturity may be reached after 10 to 12 years; thereafter reproduction may occur annually. A large six-foot (1.8 m) tall coral tree is estimated to be between 30 and 40 years old; a colony life span may be 70 years. Some species may live even longer.

On Hawaii’s deep reef slopes and throughout the world, black corals host unique communities of marine life. Their tree-like colonies create habitat for crustaceans, bivalves, and fish. Each coral may host a different combination of species. Some residents are commensals — dependent partners that live only on the black coral. Many species in this deep reef community are new to science. Using advanced diving technology, researchers now visit and study this twilight world.

Distribution
all oceans, most common in deep water habitats of tropical seas