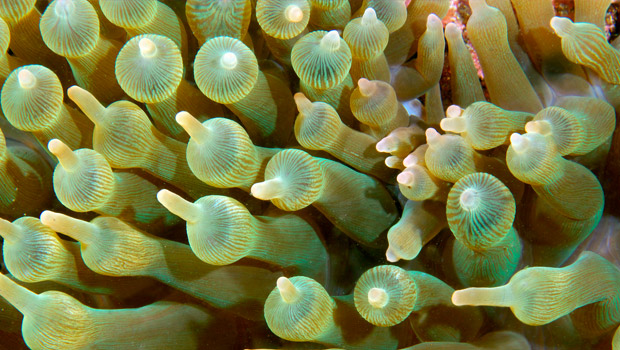 Sea anemones are well-recognized members of the Phylum Cnidaria, the animal grouping known as the stinging animals. The cnidarians include the anemones, corals, jellyfish, Portuguese man-of-war and hydroids. They all have a simple soft body with two major tissue layers arranged around a central gut cavity. A ring of tentacles surrounds a central mouth, and the tentacles bear stinging cells which contain nematocysts used in food capture and defense. There are two basic body forms among the cnidarians, the polyp, which looks flower-like and lives attached to the seafloor; and the medusa (jellyfish), which is umbrella-shaped and floats in the water. In some cnidarians, the life cycle includes both the polyp form and the medusa form.

Sea anemones have the polyp body form: they live attached to the seafloor by an adhesive basal disc; a cylindrical body column extends up off the bottom; and the upper surface, bearing the mouth ringed by tentacles, faces up into the water. The tentacles are lined with stinging cells and are used in capturing small animal prey.

Sea anemones have microscopic algae, called zooxanthellae, living within their tissues. These symbiotic plants perform photosynthesis, and provide their host anemone with additional nutrition in the form of energy-rich compounds like sugars and starches.

The mouth is the only opening to the anemone’s sac-like gut, and any indigestible food (snail shells, etc.) taken in, must be eliminated back out the mouth. In anemones and corals, a muscular gullet leads into the digestive cavity where wall-like septa divide the gut into chambers. These septa provide body support, as well as greater surface area for the digestive layer or gastrodermis. Cilia lining the gut circulate water, delivering nutrients and oxygen, and removing wastes from the cells of the gut lining. Filaments called acontia line the inner edge of the septa, they contain stinging cells that assist in digestion by subduing the prey. Acontia are also used in defense and can be extruded outside the gut either through the mouth or through special pores in the body wall.

Sea anemones are capable of some movement. Muscles in the basal disc allow sea anemones to detach themselves from the bottom and crawl slowly so that they can relocate. Muscle fibers in the body wall and oral disc can modify the anemone’s size and shape greatly and change the amount of fluid in the gut cavity by taking in or expelling sea water through the mouth. The water in the gut acts like a water (hydrostatic) skeleton. Unlike their close relatives, the corals, sea anemones do not produce a hard skeleton. Sea anemones have no central brain, but a simple network of nerves in the body wall communicates between different parts of the anemone’s body.

Bubble-tip Anemones have great capabilities of regeneration and can reproduce asexually by splitting in half, or by splitting off small pieces of tissue from the basal disc- a whole anemone can gradually regenerate from even a fragment of tissue. These anemones clone prolifically in shallow reef areas, spreading and creating large beds that serve as home for significant assemblages of clownfish. Thirteen species of anemone fish are known to live in association with bubble-tip anemones.Bubble-tip anemones have separate sexes. Sperm and eggs may be released into the seawater by broadcast spawning. The anemone larval stage, called the planula, is a solid ball of cells. Hair-like cilia on its surface propel it over the bottom or up into the water. When the planula finds a suitable surface, it adheres to the bottom and changes form to become a young polyp with mouth, tentacles, and gut. Since the adult anemones cannot move very far in their life, the planula is the most important dispersal stage in the life cycle of sea anemones.