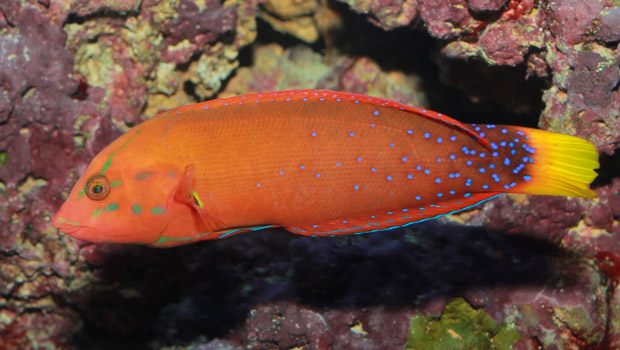 The bright red young of this species is sometimes called the tomato or clown wrasse. Its distinctive coloration, with white spots rimmed in black, may identify its immature condition and protect it from the territorial and sometimes aggressive adult males. The juvenile may reach 3 to 4 inches (10 cm) before it matures as a female and develops new color pattern: orange with blue spots and lines and the bright yellow tail for which the species is named. Later in life, it will change color again if it undergoes a sex change from female to male. Males have a green bar on the side of the body, a dark band on the upper and lower fins, and more numerous blue spots.

Like other members of the Family Labridae, the yellowtail coris wrasse has an elongate soft body that is tapered and spindle-shaped. The dorsal fin is continuous, and like the other fins, rounded and soft. The pectoral fins are used extensively for swimming with up and down “flying” motions. The pointed snout has a terminal mouth and fleshy lips. Prominent canine teeth protrude slightly from the mouth and are effective in plucking small crustaceans and molluscs from the reef.

The wrasses (Family Labridae) are among the most common and diverse of reef fishes in Hawaiian waters. There are 43 different wrasse species reported and 13 of them are endemic, found only in Hawai’i. Although they are a varied group, they all share an elongated, body tapered at head and tail. Their soft, continuous dorsal and anal fins are often held close to the body, accentuating their spindle shape. The caudal fin (tail) is soft and broom-like; it is often folded to a squared-off shape. Wrasses are alert, the eyes constantly moving, scanning the reef and surroundings. They are seen alone, in pairs, or small groups close to the reef where they forage for small reef invertebrates like crustaceans, molluscs, worms, urchins, and brittlestars.