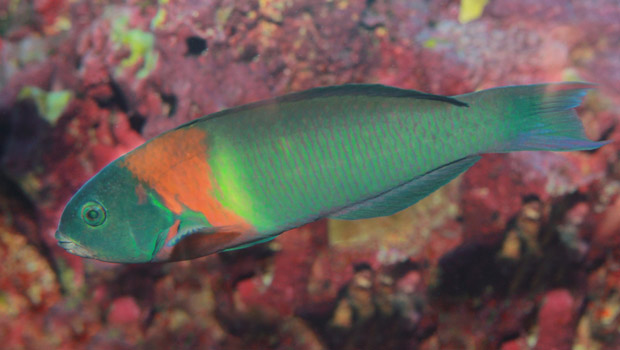 The saddle wrasse is one of the most common reef fish in Hawai’i, and it is also an endemic species, one unique to the islands.  Named for the prominent red saddle behind the pectoral fins, this colorful wrasse has a blue head, green body and lavender highlights on the edges of the pectoral and caudal (tail) fins. Like other members of the wrasse family, it can be recognized from a distance by its characteristic swimming pattern, the pectoral (side) fins beat up and down in a “flying” motion.

Like other wrasses, the saddle wrasse is capable of sex reversal and shows different color patterns at different stages in its life. Juveniles have a greenish back, pale belly, and black stripe from nose to tail. Most individuals begin life as females, when older they show the typical blue, red, and green pattern. Females that change sex to become males have a white bar behind the red saddle. These sex-changed individuals are called “terminal phase” males; they become dominant territory holders that maintain a harem of females. As a family, wrasses are well known for a life history that includes sex change.

The wrasses (Family Labridae) are among the most common and diverse of reef fishes in Hawaiian waters. There are 43 different wrasse species reported and 13 of them are endemic, found only in Hawai’i. Although they are a varied group, they all share an elongated, body tapered at head and tail. Their soft, continuous dorsal and anal fins are often held close to the body, accentuating their spindle shape. The caudal fin (tail) is soft and broom-like, it is often folded to a squared-off shape. Wrasses are alert, the eyes constantly moving, scanning the reef and surroundings. They are seen alone, in pairs, or small groups close to the reef where they forage for small reef invertebrates like crustaceans, molluscs, worms, urchins, and brittlestars. Their prominent lips hide canine teeth in upper and lower jaws that are used to pluck their invertebrate prey from the reef. Pharyngeal bones in the gill area help crush the shells of their prey. Larger wrasses can also take small fishes. Wrasses are active predators by day, they shelter in reef crevices or bury in sand patches at night.