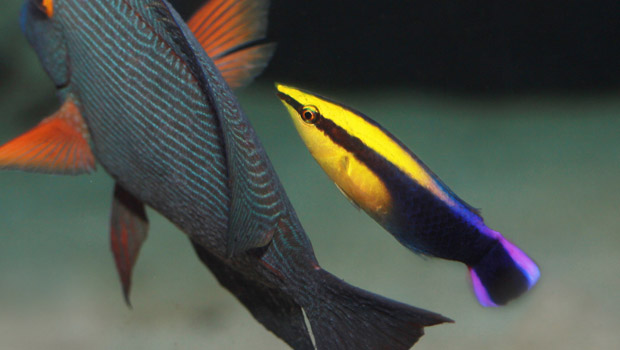 This brilliantly-colored wrasse is recognized by its habit of “cleaning” host fishes. Individuals establish “cleaning stations” at specific locations on the reef where a variety of “client” or host fishes assemble and await the cleaner wrasse’s services. The distinctive coloration and dancing movements of the cleaner wrasse appear to communicate its identity to other fishes and may protect it from attack by species which would normally prey on fish of its size.

Host fish signal their receptiveness for cleaning by holding nearly motionless in the water, often posing with their fins, or mouth and gill covers, spread wide. The cleaner wrasse moves over the body of the client fish, using its pelvic fins to “tickle” the host’s skin – apparently a reinforcing factor in the cleaning symbiosis. The wrasse may also enter the mouth or gill chambers of larger host fishes. The cleaner wrasse’s special mouth design enables it to remove crustacean ectoparasites from the host fishes, and in the process of cleaning, they also feed on mucus and some scales. The Latin species name, Labroides phthirophagus, means “louse eater”.

The male and female phases of the cleaner wrasse appear identical in color, but dominant, terminal (sex-changed) males patrol a territory that may include several smaller females and their cleaning stations. If the male dies, it is believed that the dominant female changes sex and takes over the territory. Reproduction is year round and spawning occurs in pairs. Juveniles have a different color pattern than the adults, black with a broad blue stripe on the dorsal surface.

Unlike nearly all small wrasses, this species does not bury in the sand at night. While inactive on the bottom at night, it accumulates a cocoon of mucus, similar to that observed in many parrotfishes.

The Hawaiian cleaner wrasse is endemic, found only in the Hawaiian Islands, though related species occur throughout Indo-Pacific reefs.