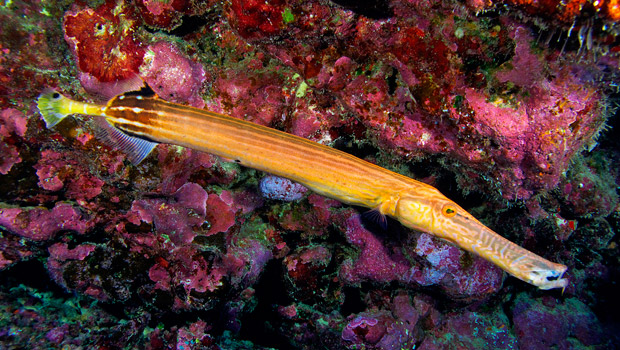 The trumpetfish is a solitary, stalking predator. Using stealth, it gains a position close to its prey and, attacking with a short darting movement, sucks up the victim with a sudden expansion of the tubular snout. A nünü sometimes accompanies schools of grazing surgeonfishes or uses the body of a large parrotfish as cover so that it can prey on small organisms driven from cover as the herbivores feed on seaweeds.

Reported from shallow reef flats to depths of at least 370 feet (111 m), trumpetfish are seen swimming slowly or hovering close to coral or rocky seafloors, or hanging motionless under ledges. Its stealthy movements are created by the small dorsal and anal fins that are positioned far back on the body. The nearly imperceptible fanning movements of these transparent fins allow the fish to swim forward or backward, or hover in horizontal or vertical positions, as they stalk prey or probe reef crevices. Three color forms are commonly reported: an all yellow form; a reddish brown form; and brown with pale bands. Two black spots, often seen on the tail fin, may be false eyespots, a form of deceptive coloration that may detract attention from the trumpetfish’s head and mouth.

Known in Hawaiian as nünü, the trumpetfish’s long, straight body shape has earned it the common local name “stickfish.” This term, however, is also used to refer to other stick-shaped fishes like cornetfish, needlefish, and halfbeaks. The long jaw and small, flaring mouth obviously inspired the common English name, trumpetfish. The trumpetfish, and other fishes with a similar mouth structure belong to the fish Order Syngathiformes. Other fishes in the group include the cornetfishes, pipefishes and seahorses, shrimpfishes, snipefishes, and ghost pipefishes. All capture prey with the sudden expansion of the mouth that generates a suction to draw in the prey. Trumpetfish stalk their prey during the day, and perhaps also at night. They appear to be most successful during twilight, at dusk and dawn.

Distribution
Hawai’i, Indo-Pacific, and islands off the eastern Pacific Ocean