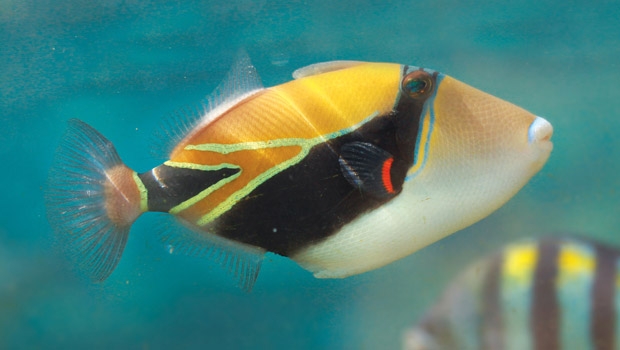 The humuhumunukunukuāpua‘a, or reef triggerfish (Rhinecanthus rectangulus), is one of the most widely recognized of Hawaiian fishes. Its angular body, distinctive color pattern, fin arrangement, and characteristic dorsal (top) spine make it easy to distinguish. It is a sturdily-built fish, reaching up to 10 inches in length, with small powerful jaws and sharp, cutting teeth. The reef trigger shares its long Hawaiian name with a close, but less common relative, the lagoon triggerfish (Rhinecanthus aculeatus).

The reef triggerfish is generally found in shallow outer reef habitats, often on surge-swept basalt reefs. It swims close to the bottom, searching for potential food items. It feeds on algae and reef invertebrates, including small crustaceans, worms, brittlestars, sea urchins, and snails. The reef trigger is not easy to approach closely and tends to keep a distance from observers, but its distinctive behavior and appearance make it easy to watch from a distance.

The reef triggerfish has a very characteristic way of swimming; it propels itself through the water using waving motions of the broadened dorsal (top) and anal (bottom) fins. This kind of swimming allows the humuhumu great maneuverability, and it can go forward or backward or even hover over the reef. The broom-like tail provides thrust for a quick dash into the protection of the reef. When pursued by a predator, the triggerfish sometimes make grunting sounds — some observers speculate that this may serve to warn nearby triggers of danger. The eyes of this wary fish are set high on its head and can move independently, so that it can scan the reef for food and predators.

When threatened, a triggerfish dives into a hole or crevice in the reef, then wedges itself into the shelter by erecting the large dorsal spine on its head. The spine is locked into place by a second, smaller spine behind it and can only be unlocked by the fish itself. Another spine on the fish’s belly also extends to help wedge the fish securely into its shelter. Triggerfish also use this wedging behavior at night, when they rest within the reef in a preferred shelter hole that they may use over and over.

The name “humuhumu”, the first part of the Hawaiian word used for all triggerfishes, may mean “to fit pieces together”. This could refer to the way some species’ color patterns resemble blocks of colors. The second part of the reef trigger’s name is ” nukuāpua‘a ” and means “snout like a pig”. To early Hawaiians, their behaviors of rooting through the sand or rocks for food and making grunting noises when handled represented pig-like habits.

The humuhumu is not highly valued as a food fish by today’s tastes, although it is edible and was recognized as such by early Hawaiians. They would use cooked pumpkins or sweet potatoes to lure the fish into baskets lowered into the water. Triggerfish were also dried and used a cooking fuel by Hawaiians who didn’t care for its taste, or when fuel was in short supply. More importantly, both species called humuhumunukunukuāpua‘a (Rhinecanthus rectangulus and Rhinecanthus aculeatus) were used as substitutes for pigs in some religious ceremonies.

In l984, the reef triggerfish (Rhinecanthus rectangulus) was selected as the official State Fish of Hawaiâ€˜i after a popular vote and the approval of the State Legislature. The State Fish’s official term of office lasted five years, and there was no re-election campaign. In May of 2006 Governor Linda Lingle signed a bill that permanently established the humuhumunukunukuāpua‘a as the State Fish of Hawai‘i.