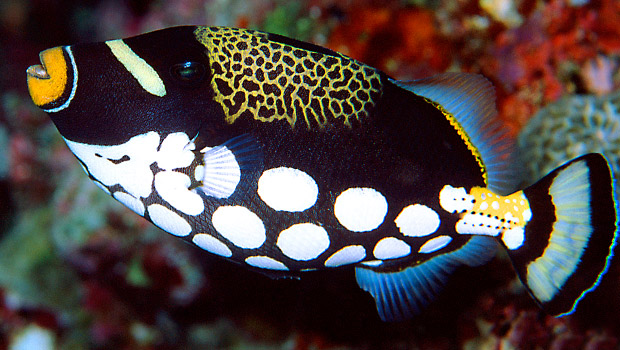 Triggerfishes are among the most distinctive residents on any reef.   The clown triggerfish (Balistoides conspicillum) is particularly conspicuous.     Large white polka-dots interrupt the black background of the lower half of the body.   Gold markings accentuate the lips, a saddle below the eye, the inner edges of the fins, the base of the tail, and a broad patch on the back behind the eye.     Why such dramatic coloration?   This species is very aggressive and some fish behaviorists speculate that its gaudy “poster coloration” may serve as a warning to competitors or predators that this animal is a well-defended territory holder.

The clown triggerfish is found on reefs throughout the Indo-Pacific, from East Africa’s tropical coast in the Indian Ocean to the shores of Samoa in the Central Pacific.   But, despite its broad distribution, this colorful species is relatively uncommon on any reef.     It inhabits clear seaward reefs, usually in coral-rich areas next to steep drop-offs.   Like other triggerfishes, it has a retractable dorsal spine just behind the eye, and can wedge itself firmly into reef crevices for protection and when resting at night.   Strong teeth and powerful jaws enable this fish to feed on armored reef invertebrates like crustaceans, molluscs, and even long-spined sea urchins.     At 13 inches (33 cm), the clown triggerfish isn’t the largest member of its family.     Some may reach over 24 inches (63 cm) long.

The eyes of these wary fish are set high on their heads and can move independently, so that they can scan the reef for food and predators.   When threatened, a triggerfish dives into a hole or crevice in the reef and wedges itself into the shelter by erecting the large dorsal spine on the head.   The spine is locked into place by a second, smaller spine behind it and can only be unlocked by the fish itself.   Another spine on the fish’s belly also extends to help wedge the fish securely into its shelter.   Triggerfishes also use this wedging behavior at night, when they rest within the reef.