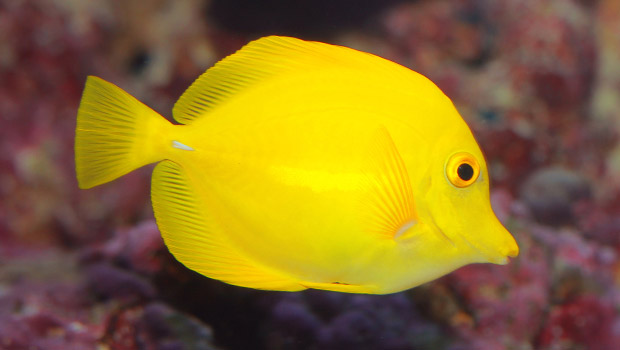 The brightly colored yellow tang is perhaps the most easily recognized of all Hawaiian reef fishes. A member of the surgeonfish family, Family Acanthuridae, the yellow tang exhibits all of the features that are characteristic of the group. Roughly oval in outline, it is highly compressed from side to side (laterally), has a small mouth, and eyes set high on the head. The yellow tang also has the scalpel like spine at the base of its tail which gives the surgeonfish family its common name. The blades on either side of the tail are modified scales. Each fits into a slot, but can be exposed when the fish flexes its tail. The blades are used both in defense from predators and to ward off competitors for feeding or shelter areas.

The yellow tang is the only solid yellow fish commonly seen on Hawaiian reefs. Its Hawaiian name, lau’ipala, means “yellowed ti leaf,” and the scientific name also refers to its distinctive coloration, flav, from the species name flavescens, means yellow in Latin. The only part of the body that is not yellow is the white spine (or tang) at the base of the tail. Often found in small groups, the yellow tang frequents shallow reefs, though individuals can also be found to depths of 100 feet (30.3 m) or more. This species has an anti-tropical distribution, meaning that it is found in subtropical waters but does not occur in the warmest equatorial seas. Although very common in Hawai’i, the yellow tang is rare on the western extremes of its range.

The small, slightly down-turned mouth of the yellow tang contains flexible, comb-like teeth well adapted to grazing on the algae that makes up its diet. Like other herbivores, it spends a great deal of its time feeding and so will usually be found picking seaweed from the rocks and reef framework. Algae feeders play a crucial role in coral reef ecosystems. By keeping algae in check, they prevent fast growing seaweeds from choking out the slower growing corals.

The yellow tang is one of the smaller surgeonfishes and it has a somewhat longer, thinner snout than the other members of its family. Like many reef creatures, the yellow tang changes both its appearance and its behavior at night. The bright, lemon yellow shifts to a darker, grayish-yellow and a thick white band appears along the lateral line. Groups split up and individual fish can be found in crevices in the reef. Like most surgeonfishes, tangs broadcast spawn in groups; females release eggs and males release sperm into the water where fertilization takes place. The clear larval stages develop in the plankton until they complete development and are carried close to reefs where they will take up life in the adult habitat.

Though the surgeonfishes are not generally considered dangerous, their tail spines can inflict deep wounds. Snorkelers and divers can easily avoid being injured by simply observing the animals and not attempting to touch them.