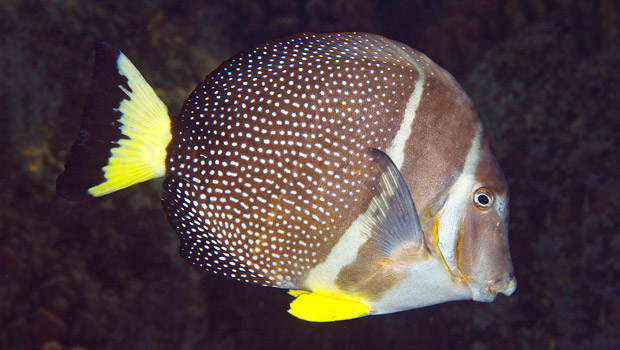 A member of the surgeonfish family, Family Acanthuridae, the whitespotted surgeonfish (Acanthurus guttatus) exhibits the features characteristic of the group. Roughly oval in outline, it is highly compressed from side to side (laterally), and has a small mouth and eyes set high on the head. The whitespotted surgeonfish also has the scalpel like spine at the base of its tail which gives the surgeonfish family its common name. The blades on either side of the tail are modified scales. Each fits into a slot, but can be exposed when the fish flexes its tail. The blades are used both in defense from predators and to ward off competitors for feeding or shelter areas.

This species, sometimes known as the mustard tang, is very distinct – it is fairly deep-bodied, giving it a somewhat circular body outline. The color is mustard brown with three white bands and many small white spots on the back half of the body. Some scientists suggest that the white spots that distinguish this species mimic the many bubbles in the surge-swept reef waters, thus helping to camouflage the fish. The pelvic fins are a bright yellow.

The whitespotted surgeonfish, called ‘api in Hawaiian, is found throughout the Indo-Pacific region. This diurnal species lives in the surge zone at the outer edges of reefs, and often forms small schools. The small, slightly down-turned mouth contains flexible, comb-like teeth well adapted to grazing on the algae that makes up its diet. Like other herbivores, it spends a great deal of its time feeding and so will usually be found picking seaweed from the rocks and reef framework. Algae feeders play a crucial role in coral reef ecosystems. By keeping algae in check, they prevent fast growing seaweeds from choking out more slowly growing corals.

Like most surgeonfishes, whitespotted surgeonfish spawn in groups, producing small eggs that drift in open water. The clear larvae develop in the plankton and, when juvenile Achilles tangs first take up residence on the reef, they lack the orange spot.