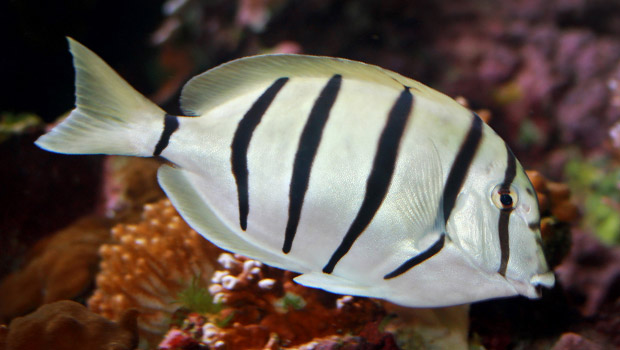 In Hawai’i, the manini, or convict tang, is the most abundant member of the fish family called the surgeonfishes or tangs. It is pale greenish-white in color with black vertical bars that run from the base of the dorsal fin all the way to the belly. As a member of the Family Acanthuridae, the convict tang (Acanthurus triostegus) exhibits all of the features characteristic of the group. Roughly oval in outline, it is highly compressed laterally (from side to side), has a small mouth and eyes set high on the head.

Surgeonfishes are named for the sharp blades they bear on either side of the tail. The blades can be exposed by flexing the tail, and are used in competition and defense.  In the manini, these blades are only weakly developed and are visible only on very large specimens. Manini probably gain protection from schooling and from their color pattern, the bars that give them their common English name, convict tang. These vertical bars are a kind of “disruptive coloration” and may serve to break up the body outline, making it harder for a predator to target an individual fish.

The convict tang can be found in nearly all nearshore habitats, from tidepools and reef flats to deeper waters, 150 feet (45 m) down the reef slope. During the day, manini are seen individually, in small groups, or in large schools, grazing on fine algae that grow over rock and coral surfaces. The small, slightly down-turned mouth of the manini contains flexible, comb-like teeth well adapted to grazing on the algae that makes up its diet. Like other herbivores, it spends a great deal of its time feeding and so will usually be found picking seaweed from the rocks and reef framework. Algae feeders play a crucial role in coral reef ecosystems. By keeping algae in check, they prevent fast growing seaweeds from choking out more slowly growing corals.

This day-active species shelters close to the reef at night, remaining relatively immobile and exhibiting a dusky night-time color pattern that often includes dark blocks between the bars.

Like most surgeonfishes, convict tangs spawn in groups, producing small eggs that drift in open water. The clear larvae develop in the plankton and, when juvenile manini first take up residence on the reef, they lack the trademark bars. In the summer and fall, individual or schools of post-larval manini are a common sight in Hawaiian tidepools. The young are transparent if newly settled from the 2.5 month planktonic phase. Young manini spend part of the juvenile life within the protection of the pools; as they mature, they move into deeper, more turbulent waters or onto the reef itself.

Manini were an important food source in early Hawaii and were given names for the different stages of their life cycle. The clear stage (postlarvae) that appear in tidepools are called ‘Åhua-liko (‘Åhua, young stage of fishes; liko, leaf bud). Once the characteristic bars appear within 24 to 48 hours, the young fish are called ‘Åhua -kani’o (kani’o, striped). ‘ÅŒhua-ha’eka’eka is the name give when their skin begins to darken (ha’eka’eka, dirty or grimy looking), but they were also called ‘Åhua-pala-pÅhaku, for the name of a fine filamentous brown algae they begin to eat. Kakala-manini is the half-grown stage, and when they reach adulthood they are called manini. In modern Hawaiian slang, manini can mean “no big thing.”