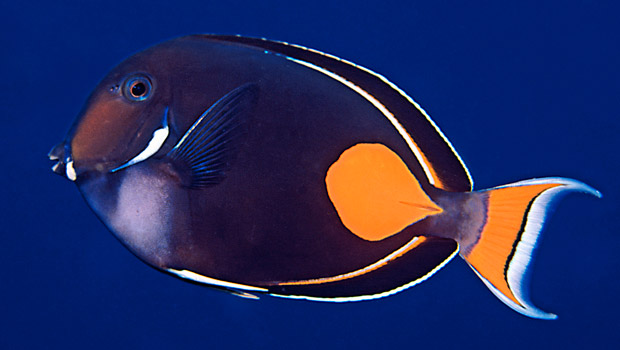 This dark-colored surgeonfish is easily recognized by the brilliant orange patch at the base of its tail. A member of the surgeonfish family, Family Acanthuridae, the Achilles tang (Acanthurus achilles) exhibits all of the features characteristic of the group. Roughly oval in outline, it is highly compressed from side to side (laterally), has a small mouth and eyes set high on the head. The Achilles tang also has the scalpel like spine at the base of its tail which gives the surgeonfish family its common name. The blades on either side of the tail are modified scales. Each fits into a slot, but can be exposed when the fish flexes its tail. The blades are used both in defense from predators and to ward off competitors for feeding or shelter areas. The orange marking around the blades of the Achilles tang is generally interpreted as an example of warning coloration – the bright color highlights the presence of the sharp spines.

The Achilles tang is found throughout Hawai’i, Polynesia and Micronesia. This species aggregates in surge zones on rocky shores and near exposed coral reefs where water moves swiftly through surge channels. Active and aggressive, it has been observed driving away other surgeonfishes that come into its feeding territory. The small, slightly down-turned mouth of the Achilles tang contains flexible, comb-like teeth well adapted to grazing on the algae that makes up its diet. Like other herbivores, it spends a great deal of its time feeding and so will usually be found picking seaweed from the rocks and reef framework. Algae feeders play a crucial role in coral reef ecosystems. By keeping algae in check, they prevent fast growing seaweeds from choking out more slowly growing corals.

Like most surgeonfishes, Achilles tangs spawn in groups, producing small eggs that drift in open water. The clear larvae develop in the plankton and then take up residence in the reef. Juvenile Achilles tangs lack the orange spot.

Naming this fish after Achilles, the Greek hero of Homer’s Iliad, seems contradictory. According to the myth, Achilles’ mother held him by the heel when she dipped him in the river Styx to make him invulnerable. Years later, Achilles was killed by an arrow shot into his heel, the one vulnerable place on his body. The “heel” of the Achilles tang is hardly a vulnerable area. The word tang, however, seems appropriate, one definition being “knife or dagger.” Hawaiian uses for this fish include both food and tools. The blade was incorporated into fishing lures used for catching other fish species. The Hawaiian name, paku’iku’i, refers to splashing or beating the water and to a method of fishing in which fish were herded into a net by beating the surface of the water.

Though the surgeonfish are not generally considered dangerous, their tail spines can inflict deep wounds. Snorkelers and divers can easily avoid being injured by simply observing the animals and not attempting to touch them.