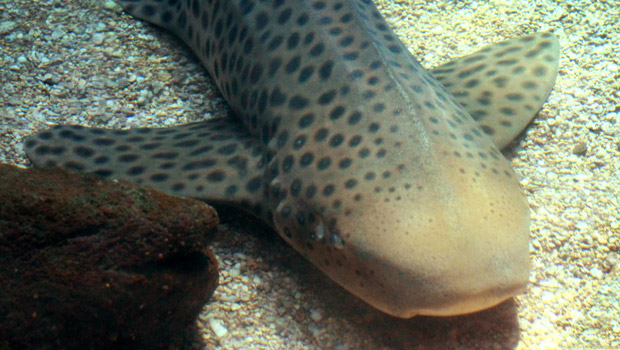 The zebra shark, or leopard shark as it is sometimes known, is a common shallow water species of the Indian Ocean and west-Pacific region. It is found on and adjacent to coral reefs, usually in areas of sandy seafloor. Its distribution ranges from South Africa to the Red Sea, from Pakistan, India and Southeast Asia to China, Indonesia and the Philippines, from Australia to New Caledonia, and north to southern Japan. It is not found in Hawaiian waters.

This shark’s two names are derived from the color patterns found at different stages of its life. When young, the zebra reef shark is dark with yellowish bars. As an adult, it is tan with dark spots. Though it may reach nearly 12 feet (3.6 m) in total length, its long tail makes up roughly half of its length. It is a slow-moving, even sluggish shark, and it is generally considered to be relatively harmless. The zebra/leopard shark has a somewhat cylindrical body with prominent ridges on its sides. The head is broad and conical with a very rounded snout. It has a very flexible body and fins and can squirm into narrow cracks, crevices and reef channels when searching for food.

Like other sharks, the zebra/leopard shark has a skeleton of flexible cartilage, reinforced with some mineral deposits. The scales, called denticles, are tooth-like in structure and very firmly embedded in the skin. Unlike many sharks, the zebra/leopard shark does not need to swim constantly in order to ventilate its gills. It is often found sitting quietly on the seafloor, actively pumping water through the mouth and over the gills, which are located in five small slits on each side of the head.

The zebra/leopard shark feeds on snails and bivalves, crabs and shrimp, and some small fishes. The teeth have a large central, triangular cusp with a smaller cusp on either side. Because sharks’ teeth are only loosely attached to their jaws, they may lose or break teeth as they feed. Special tissue in the jaws continually makes sets of teeth, and the new teeth automatically move forward to replace the older ones. The zebra/leopard shark’s mouth is located on the underside of its head and the jaws fold up and out of the way when the shark is swimming, a design that contributes to their streamlining. When feeding, the jaws open downward and outward, protruding slightly to take in prey.

Like other sharks, the zebra/leopard shark has internal fertilization. The male transfers sperm into the female’s reproductive tract using sperm-transfer structures called claspers. This species is oviparous and females release their eggs in tough capsules that are anchored to the seafloor by tufts of fibers. The shark embryos develop inside the capsule, nourished by a rich yolk. When they hatch at about 8-10 inches (20-26 cm) long, these “pups” look like miniature versions of the adults and begin feeding on their own in the protected reef shallows