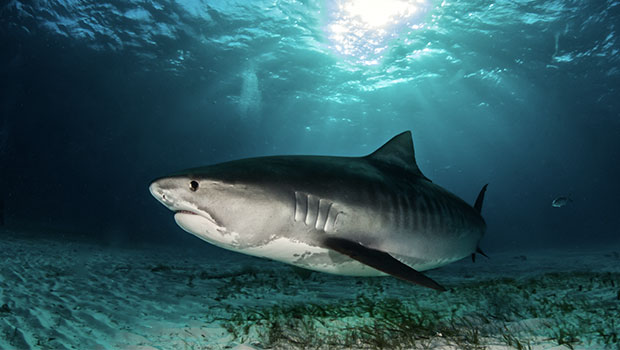 The tiger shark is distinguished by its blunt, almost squarish snout, distinct “notched triangle” teeth, and long upper tail lobe. The dark brown tiger stripes for which the species is named are visible on small individuals (5-6 feet), but these markings fade with age and larger specimens only have bars near the end of the body. Their major colors would be grayish above and pale below, a color pattern called countershading that provides some camouflage as the shark swims in open water.

The teeth of tiger sharks are unique, triangular and serrated, but with an angled notch in the cusp not found in other sharks. The tooth design seems to combine both cutting and grasping functions. Tiger sharks can be sluggish, but are very active when stimulated by the presence of food and have been implicated in attacks on humans. They have a reputation for being opportunistic feeders, taking prey from the bottom as well from open water. They have been known to take small prey like snails and lobsters whole, larger prey like sea turtles and sea birds have also been found whole in their stomachs. They are also known to attack other sharks, porpoises, and Hawaiian monk seals. Even inanimate objects like tin cans and boat cushions have been reported in their stomachs. These items probably represent cases of mistaken identity since the shark would not be able to digest them and might regurgitate them.

Tiger sharks are ovoviviparous, meaning the eggs are retained in the female’s reproductive tract and each embryo is nourished by a large yolk. The eggs hatch within the female and the young sharks, called “pups”, are born live. The pups are about two feet long when they’re released and look like miniature versions of the adults. They receive no further care from the parents and must begin to feed and fend for themselves.

Like other sharks, the tiger shark has a skeleton of flexible cartilage, reinforced with mineral deposits. The scales, called denticles, are tooth-like in structure and are firmly embedded in the skin. Like many sharks, the tiger shark must swim constantly with its mouth open so that oxygen-rich water will flow over the gills. The gills are located in five separate slits on each side of the head. Sharks donâ€™t have a swim bladder like bony fishes, so they are heavier than water and will sink to the bottom if they stop swimming. Adaptations to help them stay up in the water column include an oil-filled liver that helps reduce their density, as well as fins that help create lift as they swim.

Early Hawaiians had many uses for sharks and sought tiger sharks for its teeth and skin. The teeth were used to make tools and weapons, and the tough, abrasive skin was used both as sand paper and in making drum heads.

Distribution
tropical and subtropical areas of all oceans