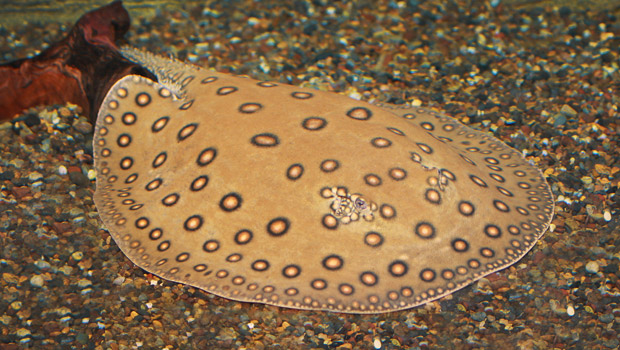 Stingrays are related to sharks because both have a skeleton made of cartilage. This is the same light, flexible material that stiffens your ears and nose. Stingrays, like all cartilaginous fishes, also have rough, sandpaper-like skin because of the presence of tiny placoid scales. These scales have the same composition of teeth. They consist of a pointed tip that is directed backward. The stingray’s special flattened body shape allows it to cover itself with sandy or muddy sediment, becoming nearly invisible. The stingray’s mouth and 5 pairs of gill slits are found on the underside of the body. Their diet consists of small crustaceans, fish, and molluscs. A technique the stingray uses to capture prey is to trap it under its body, then slowly adjusting its mouth toward prey to swallow.

Stingrays have accessory respiratory openings called spiracles just behind the eyes on top of the head. When resting in sandy or muddy bottoms, water cannot be taken in through the mouth for respiration. The spiracles then open so the stingray can pass water over the gills and obtain oxygen.

The Freshwater stingray (Potamotrygon motoro) or motoro is widely distributed throughout the rivers of South America. Living in shallow water near mangroves, it spends most of its time buried in soft mud or sand, with only its eyes and spiracles exposed. The motoro is quite docile, but its spines carry an extremely painful sting. Located midway down the tail, the spines are used in defense rather than to attack. The motoro may carry up to three spines at one time. As new spines develop, older spines drop off, being shed two to three times a year.

To protect our freshwater habitats, illegally importing these animals to Hawai’i carries a severe penalty.