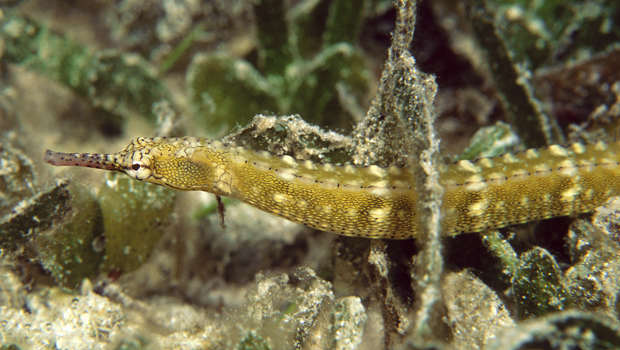 The pipefishes belong to the family Syngnathidae, a group which includes also the seahorses and seadragons. All pipefishes have long thin bodies, hence their name, and the body is segmented, formed by a bony armour beneath the skin. As with the other groups in this family, pipefishes have tubular snouts with a small mouth, which they use to suck up zooplankters and small animal larvae. Because the rigid body plan minimizes body flexion and movement, locomotion is accomplished by gentle motions of the fins. Accordingly, all pipefishes are slow moving animals. The majority have a cryptic lifestyle and camouflaging themselves and remain motionless, but some of the tropical and subtropical species are brightly colored and are moderately active. Eggs are deposited by the female on the male’s soft underbelly, where they are incubated until they hatch.