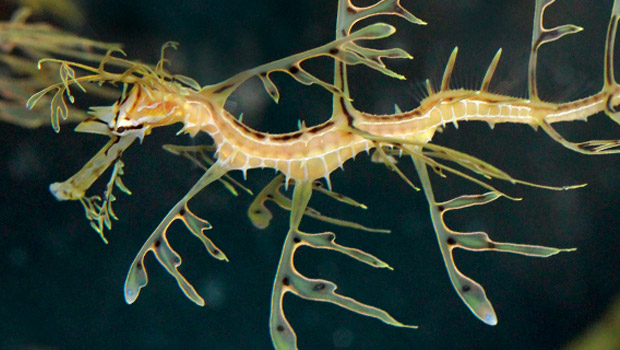 Ancient mapmakers used their imagination when labeling the mysterious edges of the known world – “Here be dragons,” they warned. Fast-forward to the age of science: Long after most folks gave up believing in dragons, imagine naturalists’ surprise when dragons were actually discovered – seadragons that is!

The leafy seadragon (Phycodurus eques) is an Australian native, living only in the chilly waters of the southern coast where ocean temperatures seldom rise above 65ºF (18ºC). Within its definitive habitat in the kelp reef, the species is found at depths of 20 to 165 feet (6-50 m) or more. It usually occurs over sand patches close to kelp-draped rocks, where it cruises and hovers as it sucks mysid shrimp and other crustaceans from seaweed surfaces and the surrounding water.

What makes this dragon a fish? The leafy seadragon is a relative of the pipefishes and seahorses – all are members of the Family Syngnathidae. This group of tube-snouted fishes shares some unique adaptations and looks decidedly un-fishlike. For starters, they all have the distinctive tubular jaw that opens rapidly to suck in prey. Then, there are the bony plates that sheath the body in an armor-like casing. Reduced pectoral fins are set just behind the gill cover on the head and are barely detectable. The transparent dorsal fin is set far back on the body and undulates fan-like, providing the propulsion that allows the fish to glide over the seafloor. All other fins are reduced or gone! Perhaps the most unusual syngnathid feature involves the way they reproduce. Syngnathids incubate their eggs on their bodies, holding clutches of eggs between modified fins, embedding them in special skin patches or enclosing them within pouches. And in most seadragons and pipefishes as well as all seahorses, it’s the males that brood the eggs after receiving them from the females.

Even in a group of fishes known for being unusual, the leafy seadragon pushes the envelope. It is among the largest of the seahorse allies, reaching lengths of nearly 20 inches (50 cm). Its camouflage is magnificent — leafy tabs, called cirri, sprouting from its skin make it a near perfect match to its seaweed-rich habitat. But, look carefully and you’ll pick out its horse-like head and the sculptured plates that armor the body. The scientific name records all these characters: phyco means leaf; durus is hard; and eques, of course, means horse.

There is still much to learn about the leafy seadragon. No one even knows exactly how many exist in its native Australian waters. But, it is certain that this species is rare and the Australian government has taken steps to assure its protection. Collecting is strictly regulated and aquaculture techniques are being perfected. From this research, scientists have learned that the leafy seadragons may live 5 to 7 years. When mature at about two years old, they reproduce once each year, and females may produce up to 200 eggs per clutch. Females transfer the eggs to the male and they are brooded in a special skin patch on his tail skin for 4 to 5 weeks. When the young hatch, they are just 3/4 inch (2 cm) long.

The care and feeding of seadragons is demanding – they require cool conditions and special food. The secret lies in obtaining “dragonettes” young enough to train to eat non-living foods and then gradually weaning them onto a combination that includes frozen mysids and live penaeid shrimp. Their early growth rate of ¼ inch (0.6 cm) per week slows as they get older. When mature, they are close to 15 inches (38 cm) long.