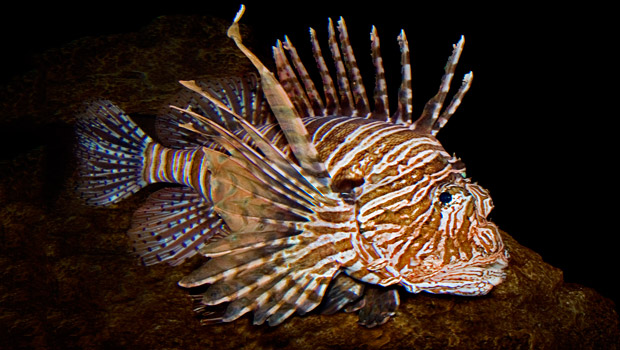 With winglike fins spread wide, this showy member of the scorpionfish family (Family Scorpaenidae) has inspired many common names: turkeyfish, fireworks fish, zebrafish, butterflycod, red firefish, and many others. The Tahitian name may possibly be the most appropriate: tatarahiau  meaning “that which sticks out on all sides” — aptly describes the bristling appearance of this fish. The scientific name, Pterois, refers to the wasp-like sting it can deliver to potential predators.

Like other scorpionfishes, the lionfish is venomous. When approached, it directs the dorsal spines toward the potential threat and may even lunge forward, perhaps as a warning. The toxin of this South Pacific species is stronger than that produced by its Hawaiian relative (Pterois sphex), possibly because the larger number of potential predators on more tropical reefs may require greater protection.

Well-defended, the lionfish pursues its life style as an ambush predator, swimming slowly or hovering over the reef. It is often found resting motionless, perched sideways or even upside-down in caves or under large coral heads. It moves more swiftly when lunging to capture prey, primarily shrimp and small fishes, which it may corral with the fan-like pectoral fins.

This lionfish species reaches about 12 inches (30 cm) in length and occurs on both lagoon and seaward reefs to depths of over 165 feet (50 m). Found throughout the western tropical Pacific from western Australia and Malaysia to the Marquesas, and even north to the waters of southern Japan and Korea, this fish does not occur in Hawai’i. Because of its extreme toxicity, it is unlawful to import this fish into the state without special permits from the State Department of Agriculture. The Hawaiian turkeyfish, Pterois sphex, is similar in appearance to this invasive species, but is a distinct species found only in Hawai`i.

The Indo-Pacific lionfishes, Pterois volitans and P. miles, have achieved notoriety during the past decade as they have quickly invaded the western Atlantic, raising major concerns about their impacts on native communities. Between 2004 and 2010, lionfish abundance was found to have increased rapidly.Â  In 2010 lionfish accounted for nearly 40% of the total predator biomass in the system. This increase in abundance coincided with a rapid (over just two years) 65% decline in the biomass of the 42 Atlantic fishes recorded as lionfish prey. These invasive lionfish have spread throughout the Caribbean and as far south as Venezuela and north to North Carolina.